SK's parents had a very peculiar request about 4 days back. Initially, they told that they wanted to take her to Ranchi. I knew that this was not going to happen as couple of her neighbours had informed me quite early that the family was too poor to even pay the medical bills at NJH.
I called the father separately. I asked him about the request to take to Ranchi. He told me that the family was planning to take SK home to die. But, he was also going to try out some black magic – called ‘jhad phuk’ in local terms by the witchdoctor called ‘ojha’.
It was unbelievable. But, true in rural areas in third world countries. After much persuasion, he agreed to allow us to try to save his daughter.
It is not uncommon to see new amulets being tied around patient’s wrists or put along with a necklace while they are still admitted in hospital.
Couple of photographs of patients with things tied around their bodies. 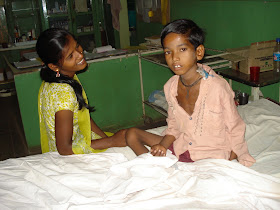 IK, who was clinically diagnosed to have encephalitis - he was too sick to be even taken elsewhere. He made a remarkable recovery. If you look carefully you can see one blue colored and a white colored thing tied over his left shoulder. IK's father had quite a lot of faith on the treatment we were giving him. Then, I asked him about the reason for the extra things which used to change almost every alternate day. IK's father would only giggle in reply. 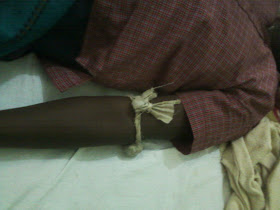 I found this tied on AS's arm couple of hours after I had admitted him. I am sure that it was not there when he had come in. Unlike what I had expected, AS was taken to the nearest medical college hospital the next day morning. But, he passed away the very next day.
It is quite rare that we see patients especially with medical complaints who does not have one of these amulets tied around their neck or wrist. Many a time, especially with snake bites, they perform quite elaborate rituals before they bring the patients for treatment.
I'm not sure of having seen such practices in any other place to such an extent as I've been seeing here. I don't know about practices in other parts of the world.
Jeevan at 10:55 PM
Share