It has been quite some time since I posted a post on obstetric care at NJH. After the empanelment of NJH into RSBY, it has been quite busy. Today morning, as I visited NICU, I was surprised to find a baby wailing and quite hungry. The reason I was surprised. Couple of days back, we had delivered this little fellow and we had hardly any hope that he would make it. The story of LD’s mother will mirror the stories that I’ve been sharing through this blog over the last 8 months.

LD’s mother as well as SD, about whom I shall share in the latter part of this post comes from Garhwa, the western most district of Jharkhand. It is one of the most impoverished regions in the entire country with stories of hunger and exploitation quite common but hidden from the rest of the world. As part of the overall backwardness of the district, the health services are also very poor. Due to some reason, almost 80% of our complicated patients especially in obstetrics come from this district.

LD was pregnant for the first time. She had couple of antenatal check ups from Daltonganj which is the district headquarters of Palamu, Garhwa’s neighbouring district. She even had an ultrasound scan sometime in the 32nd week saying that the baby has an abnormal lie. However, her family claims that she had a check-up at some place couple of weeks before where she was told that the baby has come into the normal position.

LD came to us late night on 26th March. She had started contracting sometime around the evening of 25th and her membranes had broken sometime early morning of the 26th. When she did not deliver by late morning, she was taken to the nearest health centre from where she was referred to Daltoganj. However, they came to NJH straightaway. She was told that the baby is coming legs first.

I saw the patient as soon as I had finished a Cesarian section on SD. The first thing I noticed was how small her abdomen looked. On per vaginal examination, it was obvious that the baby’s shoulder had presented and the hand was on its’ way to slip out. I had to do a Cesarian immediately.

The best part was that on Cesarian section, it was obvious that she had received umpteen number of oxytocin injections. It was already tonically contracted over the baby and there was hardly a drop of liquor. I feared the worst with a compound presentation. The head and the torso was folded over each other with the back presenting at the site of the uterine incision. I had to ultimately end up putting an inverted T incision on the uterus.

On delivery, the baby was flaccid like a rag doll. There was no pulsation of the cord. Only the heartbeat was there. I was sad . . . we were going to end up with a dead baby after a LSCS. Dr. Titus was there for the resuscitation. He went through the motions of resuscitation, thanks to the classes from Wendy of Grace Babies. After about 5 minutes, there was a whimper and then a small cry . . . By the time, I closed the skin, the baby was wailing. However, there was grunting and I had asked the relatives to take him to a higher centre.

It was good to see the baby live and healthy after such an uncertain and dangerous period. Which, could have been avoided. That’s my point. Home deliveries are such a bane to the developing world. More so in countries such as India where there is no skilled birth attendants. However, even when there is a skilled birth attendant, I’m sure that a home delivery is such a dangerous thing. Many of you may be quite aware of a growing following of people who promote home deliveries, even in the west!!! Recently, I came across people writing about this.

Well, one should realise that the most common causes of maternal mortality and death are complications like excessive bleeding, obstructed labour, infections for which nothing can be done in a home delivery. Few months back, one of my friends lost his wife in a delivery done at in a small hospital in a big city. She developed a complication for which there was nothing available in that hospital. . . not even a laryngoscope for intubation or ambu-bag to mechanically ventilate. You can imagine the predicament if it was a home delivery.

The patient, SD on whom I had done the Cesarian section before LD had arrived was more terrible. She was 140 cms tall and had a Cesarian for her first delivery. She had been having contractions since early morning of the 25th, leaking since 25th evening…she had been trying to deliver at home and ultimately came to us sometime on 26th evening when nothing much was happening. To make matters worse, she had seen one of the best obstetricians in town and in her prescription, it was clearly written that the next pregnancy would be an Elective Cesarian and one pint of blood would need to be arranged.

I was thankful that SD’s Cesarian section went off uneventful. It was quite surprising that even after so many risk factors present in this patient, the relatives were quite careless as there was no blood arranged and we took quite a long time to convince the relatives of the need of a Cesarian section.

She could have died of a rupture uterus any time.

Talking of maternal deaths, I just remembered about someone making a statement sometime that one of the most common causes of female deaths of the reproductive age group in developing countries is tuberculosis. I remembered it because we’ve a 30 year old mother of five in acute care, who has come to us with one of the most terrible Chest X-Rays I have seen recently. She can hardly lie down as she is quite breathless and has a saturation of only 70% even with oxygen in full flow… The snap below is that of her X-Ray . . . 24th March was World TB Day, which we celebrated in the district. A post on that later . . . 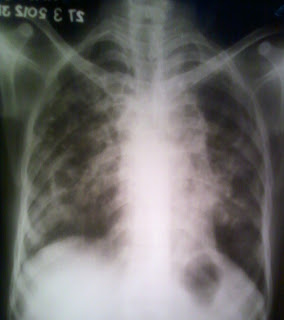