The starting lines of this immortal poem by the English poet, William Blake used to always thrill me whenever I came across them. When I joined EHA way back in 2003, one of the facts which thrilled me was that quite a number of our hospitals including NJH was sort of near to Tiger Reserves or some sort of wildlife parks. The others being Lakhnadon, Chattarpur, Makunda, Tezpur, Herbertpur, Mussoorie and Utraula.

NJH was special as the Palamu Tiger Reserve which borders the hospital, had the privilege of having had the first census of any kind for tigers in the Indian subcontinent way back in the 1920s. It seems about 120 tigers were counted during that time. Various factors contributed to the fall in tiger numbers over the years. Over the last 20 years, the numbers had come down to single digit numbers.

On reaching NJH, I was disappointed to know that the last tiger was spotted quite a long time back and there were unconfirmed reports that no more 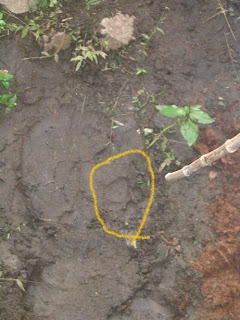 tigers really roamed the Palamu Tiger Reserve. But, I had gone for a elephant ride in the reserve sometime in 2004 and the mahout had pointed out a supposedly tiger pug mark along a muddy stream bed. I flaunted the photograph for quite a long time until one of the wildlife wardens I befriended in Vellore told me that the pug mark need not always be that of a tiger, but could be of any of the large cats like jaguar, wildcat which could be seen in any forest. And after seeing my snap of the pug-mark he expressed his doubts about this being that of a tiger.

I never got the time or the opportunity to go again to the Palamu tiger reserve. However, couple of days back we've had news that there was evidence from the park that there were at least 8 tigers inside the reserve. This is joyful news indeed for quite a lot of us. Of course, there have been some sceptics who have not taken the news well. They have expressed reservations over how the conclusions have been arrived.

Neverthless, it has reignited the desire in few people like me to explore options of visiting the reserve with the desire and prayer that we would be the first to see this magestic animal face to face after a gap of almost 10 years.
Posted by Jeevan at 9:16 AM