Well, this is the story which I had told about writing in one of my earlier blogs. This post, similiar to the previous post is about food. 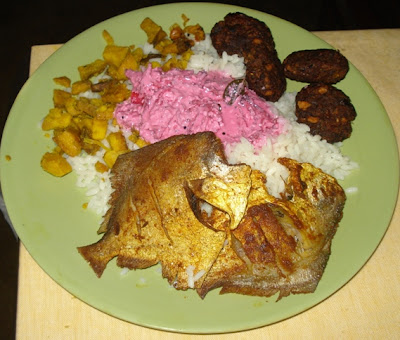 DR’s life has been full with sufferings. Born with multiple deformities of the upper and lower limbs, he was an outcast within the family. Seen as a burden, many thought that he would not live long.

DR lived on. In fact, he could walk after he got discharged. . .

It was over the last 2 months that he felt a vague sensation over the abdomen with episodes of pain in between. DR came about a week back with one of the acute episodes of abdominal pain which he had been having of late. On cursory examination, it was evident that DR had severe anemia with quite massive hepatosplenomegaly.

Hemoglobin was 2 gm% and peripheral smear showed severe microcytic hypochromic anemia. The total count was only 1500 with a normal differential count and there was total decrease in all blood cell components. There was no evidence of any infection. The next thing we should have done was a bone marrow.

We're yet to start any bone marrow aspiration cytology. I'm sure my better half would be yearning much to start it off. . .

So, I gave them the option of a referral to Ranchi.  The answer was one of the most terrible ones I've heard in my life. The boy's uncle replied, 'Sir, we find it difficult to feed him something. Somehow, we brought him here seeing his pain. None of us have any resources to take this boy any further than here.'

That dialogue sent my grey cells into action. I caught hold of DR and asked him sometime later in the day about his food habits. Nobody was interested in feeding him within his own home. He got to eat some rice twice a day. There are days when he spends the day without anything. Some tea shop owners give him a biscuit or two on and off.

Vegetables - he remembers eating some okra couple of years back and once or twice a month, he gets to eat some leftover potato curry from eateries in his village.

Well, I wondered whether he was suffering from a very severe nutritional anemia. There were features of most of the vitamin deficiencies on his body. We somehow got decent meals for DR to have during his stay in hospital.

He could still have an malignant infiltration of his bone marrow resulting in the pancytopenia. He left for home yesterday. He was quite cheerful by the time he left. I hope he gets something to eat after he reaches home. I wait for February 13 when I've called him back. I hope to see him better.

The second incident happened today afternoon. I was called to the emergency sometime today late afternoon to see a baby who was quite sick. As I reached emergency, my theatre staff had already intubated the hapless little one. They were sucking out food material from the trachea.

Little MD had a seizure sometime early afternoon and was taken to local practitioners before she was brought to us. Her body was so emaciated that I thought that she looked quite immunocompromised.

MD was hardly breathing. And there was quite a lot of aspiration. After aspirating as much as we could, we started her on mechanical ventilation. The dire need of a pediatric ventilator stared at us.

As I sat to write the chart, I had the shock of my life to see that MD was nearing 3 years and her weight was only 4.5 kilograms. Then the story came out.

MD's father is presumed dead since the last 2 months. The mother has been bringing up 5 children of which MD was the second last. MD's father even when he was around could not provide enough for the family. MD being a girl was the worst sufferer. The other 4 were boys. One year back MD had fallen severely sick and had taken treatment at NJH. She had recovered well and gone home.

The family was at the mercy of relatives for their food. The mother went to earn on and off.

It was a terrible story. . . Difficult to even believe that in this age of iPads and Medical Tourism . . . However, we have enough statistics to show that we have the worst malnutrition status in the world . . . Stories like that of MK and MD makes us think whether the realities are much worse than the data. . .

MD's little lung could not hold the stress of the mechanical ventilation. Her heart stopped beating after about 4 hours. . . I just returned after declaring her dead . . . Cause of death: Probable meningitis or tetanus resulting in aspiration pneumonia and severe malnutrition . . . Maybe, I should have written only severe malnutrition . . . It could have caused a stir in the government circles . . . Hunger death . . . Something, which nobody wants to acknowledge that we have . . .

Well, before I end this post, just wanted to share a paradox about DR. DR's first name actually stood for the Hindi of 'wealth'. Maybe his poor parents thought that naming him 'wealth' may bring him some luck . . . Unfortunately, that was not how it has turned out to be for DR who is at the mercy of his villagers for at least a meal a day . . .
Posted by Jeevan at 10:41 PM