Something good . . . from a tragedy

I'm sure quite a few of my readers would have become envious of my alarm clocks.

Tragedy stuck us last week when all the 4 of our roosters succumbed to disease. I was busy in hospital and a trip to our sister hospital in Fatehpur. The onset of disease was quite fast and they were dead within 48 hours.

Phone calls to our newly acquired friends in the field of veterinary science confirmed the diagnosis as Newcastle disease, called Ranikhet disease in India.

Yes, we knew about it . . . but was not very serious about getting them vaccinated. The major reason - you don't get single dose vaccination vials. The minimum you get is 500 dosage vials . . .

Later on casual talk with staff, I found out that almost all of my staff who had kept poultry lost their flocks to disease over the last month. And the clinical features fit in well with Ranikhet disease.

Now, there was something else happening over the last couple of weeks. Before I leave on a 3 week break to Kerala, our Community Health team had arranged meetings with all the 46 Self Help Groups that our CH team had facilitated to discuss and throw up ideas on Income Generation Programs.

Almost all the groups were doing well with the set standards of running Self Help Groups and it was good time to engage them in discussions about IGPs.

The challenges we had was mainly of 500 odd women most of whom who had not seen the outside world and has been dependent much on their menfolk for their day to day existence. We were giving them ideas about making a bit of extra income. There were odd ones who stood out. One lady who had some idea about large scale poultry farming, another one who had worked in a carpet factory before she got married to someone in our neighbouring village.

It was obvious that it was better for us to start small . . .

Our staff did quite a lot of research . . . It was in the fourth or the fifth group I met that the issue of backyard poultry was brought up. No one was quite serious about it. But, later as we researched on the net, we found out that there were quite a number of aspects about backyard birds that made it quite a good thing for women to try out for additional income.

Most of us knew, heard about and had eaten more broiler chicken. There was quite a little knowledge on country chicken and backyard poultry.

We went back to the earlier groups and had further discussions . . . And oh man . . . they were all so sad with the 'tunki bimari' the local term for Ranikhet disease. They loved to keep birds, but the disease was doing so much harm.

Chicken at home was really an advantage . .. ... the local chicken fetched quite a good rate. 200 to 300 INR per kilogram. A sudden guest could be well taken care off; a sudden need for money was not a problem with few chicken around; with vast tracts of agriculture land, there was food for the chicken all the time; there was no additional work involved, and there was a bird on the table at a regular interval . . . all came to an end with huge losses as soon as the birds got the disease.

Now, the question was about what we could do for the disease. We knew that there was a vaccine.

After quite a lot of discussions . . . we took a decision to look at facilitating vaccination of the remaining healthy birds of the groups we met so far. A rough calculation told us that the 10 groups (about 120 members) we met so far had lost a total of about 2000 birds over the last month to Ranikhet disease. The loss was much much more if one took the entire village.

Now, we have taken a decision to vaccinate birds in 2 villages where the groups have put up a specific request for vaccinating birds. Considering into fact the birds have never been vaccinated before, after discussions with expert veterinarians, we have zeroed in on the LaSota strain vaccine which was be put into the eyes of the bird.

I brought the vaccines today. 2 vials of 500 dosages each. 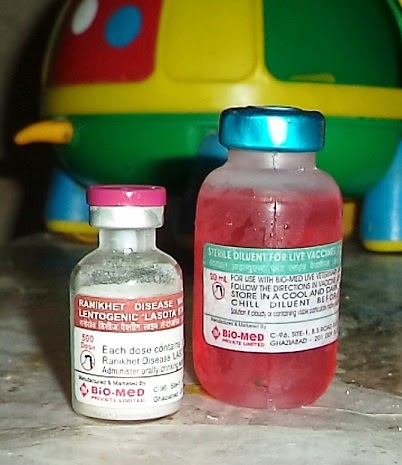 Do pray for us as we get into this business . . . quite an unexpected thing for me to do . . . I have a hunch that this could get us into bigger things . . . after we started discussions on this, I've got inquiries on if I had some idea on diseases in goat . . . It seems that word has traveled around fast . . .

My reading over the last two weeks was more on chicken and goats rather than on maternal health, child health or tuberculosis which I usually prefer to read.

Maybe soon, I would be forced to put out an advertisement for a committed missionary veterinarian . . .
Posted by Jeevan at 10:25 PM