I hope the post, Krait Attack - 3 is fresh in your mind.

Mr. Dinkar has recovered well, although he has a very badly infected bite site.

Today, as we took rounds, Dinkar and both his sons walked in quite excited. The younger son explained that they managed to kill a large snake inside their home last night. And they attributed that snake to have bitten Mr. Dinkar. 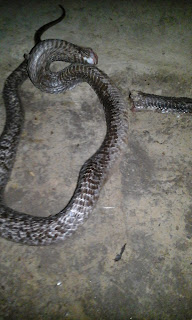 They had even taken snaps of the dead snake on their cell phone.

So, Mr. Dinkar was bitten by a cobra. Dinkar says that he is postive that this was the same snake that bit him. He clarified that the white marks which he told was not like that of a krait. He told us that the white marks one can see in the snap were what he was talking about.

So, that explains the badly infected wound. However, I don't know how to explain the fact that we had given him ten doses of Atropine/Neostigmine and he had not responded. Instead, he took 6 days on mechanical ventilation before he came around.

I just cannot imagine Dinkar and his large family living with a large cobra inside their home.

Dinkar's younger son heard a peculiar noise coming from the dark corner of their home as he woke up to switch off the electric motor which was pumping water into their fields. . Only after he woke up his elder brother did they realize that the noise was the hiss of an angry snake who was cornered. It was quite obvious that both the brothers realised soon that this must have been the culprit who injured their father and brought them much misery over the last month. And now, it was threatening to bite both of them.

They had no other option but to kill the snake. They were so angry that they chopped off it's head and after taking the snaps cut it up into pieces and burnt it.

I think Dinkar's family was lucky that nobody else was bit unlike the family in Rajasthan whose story appeared in the news recently.
Posted by Jeevan at 12:34 PM