Just wanted to put in notes about 3 out of 5 patients who came with complicated childbirth over a period of 48 hours. All the 5 cases are impossible to imagine in a modern obstetrics. While I was doing my graduation in Trivandrum, we were taught that to have an ecalmpsia in the community is criminal. Regular ANCs should ensure that early identification of pre-eclampsia is done and progress to eclampsia is prevented. Unfortunately, in quite a large portion of the country, ante-natal check up is a distant dream to many. Even when there is ante-natal check ups, there are doubts on the validity of the exercise in many places. I have come across instances where the ante-natal check up is put as done, but not even blood pressure is taken.
For all the 5 ladies, the experience has been a journey through the valley of death. They could have died any moment. A journey which could have been prevented at the departure point.
LD, 25 year old married since the last 1 year hails from a very poor family. Although, she lives with her husband in a remote area of Latehar district, about 30 kms from the hospital, when she became pregnant her family was well aware of the need for regular check ups. Her husband, SS, who has studied till 6th helped her make the 15 km ride to the nearest health centre every month for the antenatal check up. However, since the last week, her husband noticed that his wife was getting a bit blown up especially her legs. Later after 2 days, she developed on and off headache. The family thought that it will settle off. However, things went out of control on the 22nd July midnight. LD started to have convulsions. There were multiple convulsions and she had become unconscious. There was no vehicle available in the village. So, they had to wait till the morning to get a vehicle from the nearest junction.
They went straight to the district headquarters - where they went straight to a private hospital, who told them that nothing can be done. It was about 12 in the afternoon of 23rd July when LD reached NJH. By the time she reached, her husband had lost count of the number of times that his wife had convulsions. She was unconscious with a GCS of 3/15. Her blood pressure was 180/110 with Urine Albumin of 4+. Thankfully, the baby was still alive. Her platelets was 96,000/mm. However, her liver enzymes were normal. She was progressing into what is known as the HELLP syndrome.
We took her up for delivering the baby by surgery. The surgery went off uneventful. The baby was sick with an Apgar of 5 and 8 at 1 and 5 minutes respectively. Considering the number of seizures she had, she has made a great recovery.
SD's story is also very similiar. The difference is that she hails from the other adjacent district, Garhwa. Married for about a year, she started to have convulsions on the evening of 23rd. She was taken to a private hospital in Garhwa where the family members were told that she has too low a hemoglobin and so needed blood transfusion. However, the seizures continued. So, they continued to Daltonganj, the district headquarters of Palamu where she was asked to take to NJH. She arrived in NJH sometime in the midnight. The baby was already dead. SD was hardly breathing. We took a decision that the baby needs to be out. To put her for normal delivery would take quite a long time and put her organs in stress. The decision was taken to operate and deliver the baby.
Under general anesthesia, the surgery was done. However, SD went through a very uncertain phase. She was not breathing well. Then we had to put her on the ventilator. Today evening, she has become conscious, but still groggy. She has been maintaining good saturation. The next 48 hours is going to be crucial for her survival. We pray that she would not have any further complications. In addition, she needs blood - her hemoglobin remains at 5 gm%.
The last story is that of MD, 25 year old mother of a 3 year old boy. She had an eneventful pregnancy although her first child was born through Cesarian Section. Unfortunately, the place where she had been going for her regular check ups thought that she can be delivered normally. The decision turned out to be tragic if not lethal. Her pains had started yesterday early morning. Somehow, her vaginal dilatation progressed without much problem. The problem started just around afternoon when she started to push after the nurse had decided that the vaginal outlet was fully dilated. We do not know for how much more time they tried. However, the husband took a decision to bring her to us at around 2 pm. 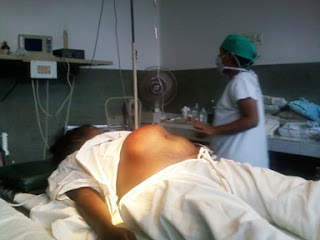 She reached NJH by around 5:00 pm yesterday evening. The snap you find here is not something we regularly find - the abdomen looking like a Bactrian camel's hump. My medical officer thought it was a Bandl's ring. I opened it. It was butchery inside the abdomen. The uterus was ripped open with the lower segment looking more like mashed meat. I had to get my surgeon, Nandamani to put back the uterus into place, as I could make heads or tails about the distorted anatomy. In addition to the rupture uterus, MD had collections of pus within the pelvic cavity. I've no idea how this has occured.
The encouraging thing is that MD is doing good 24 hours after the surgery.
All the above 3 patients along with the 2 other patients about whom I did not mention here could have contributed to the maternal mortality of the state. The lessons to be learnt are very obvious. The million dollar question is of us taking these issues seriously -
1. Availability of trained doctors in the taluk hospitals or at least the district hospitals. There has been so much talk about the FRUs. The problem here is that you need to have the specialists of obstetrics, anesthesia and pediatrics if you need to manage any of these 3 patients. In addition to this, you need to have the necessary medicines and other infrastructure. The challenge is that the probability of having all of these together at a point of time is very rare. This is where we need to encourage the speciality of family medicine in our country. There used to one more speciality aimed towards both Maternal and Child Health from the National Board. Unfortunately, both the specialities have been given a step-motherly treatment by the medical fraternity of the country.
2. Availibility of transport for sick and antenatal patients in labour. You need not live in a rural area of India to realise how difficult it is to obtain transport especially when it comes to transporting the sick. Many of the states have made quite a lot of impact by making free ambulance services (called 108) in most areas.
3. Uncertainity about treatment. The training of medical personnel in the country has taken a turn for the worse. It is not uncommon to find doctors not knowing how to manage a common conditions. I've seen many clinicians behaving like magicians - trying one medicine after the other - citing personnel experiences. There is enough material available on need for practicing evidence based medicine. Unfortunately, these things have not reached the grassroot level. This is where establishment of protocols and stress on following protocols in patient management needs to given priority. The implementation of a system of re-licensing through continuing medical education programmes needs to be on the hot-list of government priorities in streamlining healthcare.
I know there are many more lessons for us to learn from these stories. The final question is ultimately whether we as healthcare providers care for the people of this country. I know that this blog would be read by people from various parts of India who are well settled in places abroad and has made a name and fame for themselves in various clinical specialities. The unfortunate aspect is that when research is being done on how to do intrapartum surgery on the unborn fetus and we have state of the art ultrasound facilities to visualise fetus' faces intrautero, we have mothers who die because there was no one to take a decision to give Magnesium Sulphate for a eclamptic patient, no one to teach proper ante-natal care to the batch of nursing students, no one to teach evidence based medicine to students in a regional medical college. . . ultimately, no one to care for. . . Do I hear whispers of sarcasm, or prayers for the young healthcare fraternity of this country to rise to the challenge?
Posted by Jeevan at 11:06 AM