Since the day I joined here, the major crisis that I faced was the absence of rains in this region since the last 2 years. The prospect of a severe drought loomed large. Unfortunately, the drought continued. So, it was very much necessary that we have rains during the present monsoon season. Somehow, this region called the Palamu commisserate was famous for droughts since time unknown. In fact, the origin of EFICOR, the indigenous Christian relief agency happened here during one of similiar droughts in the 1960s.

Some of the photographs of the drought are put here. It was very depressing. Within the hospital, we spent about 400,000 rupees more during the last financial year (April 2010-March 2010) just to ensure that we had water. We dug 4 new borewells. 2 of the borewells, one of which went 600 feet deep did not yield even a single drop of water. By the last week of March 2010, we had to come down to supplying water for just about one hour every day. I feared that there w 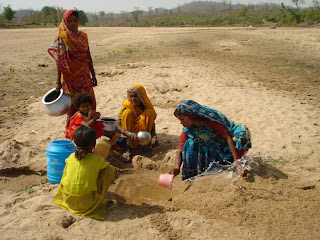 ill be tensions from patients and staff. Thankfully, nothing happened. The water situation was worser outside the hospital campus. The geology department reported that the water table has gone down by almost 40-100 feet in the whole region.

We knew that we needed the Lord's mercies. Many of our friends and well-wishers joined us in prayers for rains. The monsoons arrived in the Malabar coast ahead of time, giving us hope. I happened to be in Trivandrum during the arrival of monsoon - I was there for 8 days and it rained continuously 7 days. I prayed that this would happen when we reach back to NJH.

We arrived back at NJH on the 13th. It started to rain the same night. And it did not stop for the next 3 days. After couple of days it started to rain again continuously for about a day. We were overwhelmed by the Lord's mercies. The rains were too much that it was difficult to comprehend. Our pond filled up. However, the extent of drought which haunted us for the la 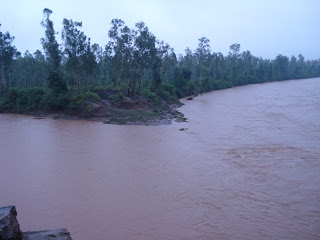 st 3 years was evident when the water level in the pond went down by about 8-10 feet whenever the rains stopped. However, the most unfortunate aspect which I noticed during the rains was the total unpreparedness of the local government in any form of watershed management. It was depressing to see rain water running off into the streams and the rivers. 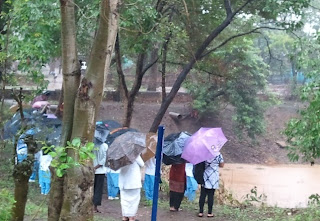 After we had the rains, we decided to thank the Lord in a unique way. We did it by holding a worship session in the middle of heavy rains beside the pond which was getting filled up. It was an unique experience for all of us. None of us gave any care to the rains wetting us or the slush dirtying our clothes. It was so refreshing and the Lord has been blessing us with regular rains on and off so far. The water table is still lower than normal - but we are certain that the Lord is at work and will give us adequate water from now on.

We've started plans to plant trees all around the campus during this time. We need to plan for water harvesting during this year so that we do not face problems in the future. Kindly pray as we plan and mobilise financial resources for the same. The campus is really green now - shall post few pictures in the next blog....
Posted by Jeevan at 12:29 PM