One of the best parts I learnt from one of my professors, Dr Joy Philip at Trivandrum Medical College was to write proper referral letters. During the college days, it used to be letters back to doctors who used to send patients for tertiary care to the Medical College OPDs and casualty.
I took this practice to heart and insisted that my colleagues write proper referral letters whenever a patient was being sent for a second opinion and even when a patient asked for a referral to a higher centre. It has served me good - when many a consultant has called us back and told us how they appreciated the well written referral letter.
Well, today we had a patient from one of the nearby hospitals. SDe, a first time pregnant lady at term was brought by her family with a history of convulsions since yesterday night. The patient was very very sick. We could not get a fetal heart sound and the patient was in obvious pulmonary edema, bringing out frothy pink colored sputum. The blood pressure was 170/130 and non-responsive to any medication.
And she was desaturating fast with shallow breathing. We got her hooked into the older ventilator. It was then I noticed that the patient was not maintaining saturation - but was maintaining good saturation with manual bagging. However, it was encouraging to notice that the family members readily volunteered to do it as well as did not complain.
I got our engineer and what he found out was heartbreaking. The collapsible corrugated rubber bag was irreparably damaged. I could only watch helplessly as Dinesh displayed it. Someone had promised help to purchase couple of new ventilators, but the finances have not come through and the prospective donors have also not been much forthcoming when we contacted them recently. 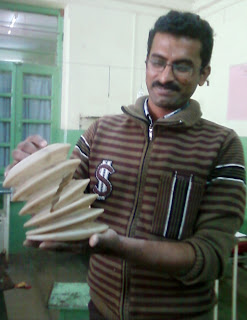 We had to get the dead baby out fast. Cesarian section was the only option to give some chance for SDe to survive. With the customary high risk consent including a risk for the chance of a 'death on the table', I went ahead with the surgery. We were blessed that the family understood that they had to allow us to be pro-active with the management.
The surgery went off smooth - it was terrible to find out that the baby was a fresh still born. Maybe if the family had straightaway brought SDe to NJH without going elsewhere, we may have got a live baby. But, then SDe also started having problems. Her blood pressure was varying from nil to 180/140. And she was putting off pink colored froth. The breathing effort was terrible. It was obvious that she would need ventilation.
We got the new ventilator which is only used along with the Boyle's machine along with the patient to the ward. We had to put her on a GTN drip to manage her pulmonary edema - but then she went into shock - for which we had to start her later on a Dopamine drip. We spent almost close to 6 hours managing SDe.
Please pray that SDe will make it. She is on ventilator and on ionotropes.
And we need a new ventilator. We could do with a copy of our older model or even better the newer model which is twice more expensive than the older model. We would actually prefer to have two more ventilators.
Coming back to referrals, I just wanted to put the piece of paper which I recieved as referral from the previous hospital that SDe was in. It is pathetic. 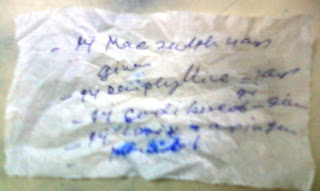 But, when I told about it to one of my colleagues, he told me that I was lucky that I have a piece of paper with the names of the medicines given so far. Yes, he is true - most of the time, we have no clue on what has been given in the previous hospital.
And please do remember the need for couple of new ventilators and for prayers for SDe to pull through . . .
Posted by Jeevan at 10:15 PM