Today, we had 2 patients, both of whom would have benefitted from Unbanked Direct Blood Transfusion(UDBT). Both were maternity patients. 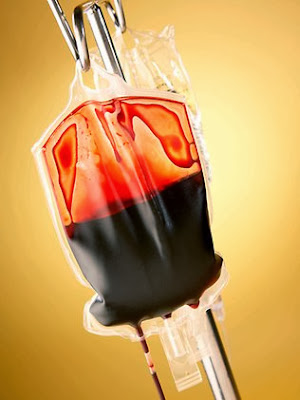 SktD had been in labour since evening. This was her third pregnancy. The history was very much suggestive that she had ruptured her uterus. The surprising part was that the patient was referred from the same place where ArD was referred. But, then the primary referral unit was not to be blamed. SktD had been referred within about 3 hours of her starting the labour pains. The PHC had identified the problem early and referred. They had reached the district hospital around midnight. The delay happened at the district hospital. It was around 7 am when she reached NJH.

Her haemoglobin was 10 gm%. I was not confident about doing the surgery without at least one pint of blood. The relatives went for blood and got one pint although we had asked for two. Someone had requested me for snaps of a rupture uterus. Dr. Roshine was kind enough to snap few pictures which I will post later.

As we finished operating on SktD, there was a call from Sr. Abha about one more patient in Labour Room, whom she thought had a rupture uterus.

NmnD, again a lady in her third pregnancy had started to contract since early morning. Her’s was a previous Cesarian. The details are quite hazy. Clinically it looked like a rupture uterus. And it was a face presentation.

I took NmnD to the ultrasound to confirm the rupture and to my surprise found that the fetal heart was going on strong.

We had her wheeled into theatre for in a matter of minutes. Her haemoglobin was 9 gm%. The relatives comprised of one young man and half a dozen ladies. I was sure that getting blood late in the evening was totally out of question. We had to take a decision. And that had to be quick. The relatives told us that for them NJH was the last resort and there was no chance ahead to Ranchi.

We decided to operate. My heart sank as the peritoneum was opened. The uterus was almost fully ruptured. The baby was already out in the peritoneal cavity. Dr. Roshine had kindly consented to help with the baby resuscitation. She did a great job. Although it had only a poor Apgar Score, the baby is alive although sick.

We pray that he will make it.

I could not get any snaps of this rupture as we were all quite busy after getting a live baby.
Now, coming back to UDBT, NmnD would have definitely benefited from it. It’s going to be 11 pm now. The family is yet to bring any blood. Things would have been much easy for us if UDBT was legal.

SktD and NmnD continue to be sick in the Acute Care Unit. Do pray for them and also for NmnD’s baby.
Posted by Jeevan at 9:00 AM