CLOSE CALL FOR ANOTHER BABY AND A NEAR MATERNAL MISS (maybe)

SD has had a very uneventful life so far. Life has been quite a mixed bag of joys and sorrows – more of sorrows like quite a lot of her friends in the rural hinterlands of the country.
Married about 6 years back, this was her 3rd pregnancy. Unfortunately, none of her previous 2 children were alive. The first one had died at the age of 4 years after a bout of fever. And the second one which was born in a hospital died 3 days after he was born.
The present pregnancy was precious to her. However, neither she nor any of her family members deemed it fit to have a regular antenatal check up. Her labour pains had started very early today morning. SD’s first child, a girl was born at home – there had been no problems.  The second child was born in the hospital – thanks to the Janani Suraksha Yojana – she ensured a hospital delivery so that she would get the financial incentive. For a poor family 1400 rupees was quite a large amount.
However, she lost her second child, a son – much treasured in Indian homes, within duration of 3 days. He was sick on the night of the 3rd day after birth. The family stayed close to the nearby town and decided that they would go to a doctor as soon as it was daylight. But the child was dead by dawn. It was a tragedy.
The financial incentive that the family received looked quite insignificant in the light of the dead baby. Meanwhile within the next 2 months, the elder one, the daughter had fallen sick. The doctors in the district hospital diagnosed cerebral malaria. They treated her for about 1 week, at the end of which she was also dead.
The family was overjoyed when SD became pregnant for a 3rd time. However, they had quite decided that the delivery would be a family affair at home rather than a physician/nurse assisted one.
The labour pains came quite strongly. SD had taken the help of one of her relatives who knew something about childbirth. Nothing much had happened by afternoon. The relative who came to help out was smart enough to realize that something was wrong.
She took the lead along with the rest of the family to mobilize SD to NJH. Going to the district hospital was not an easy choice considering the ‘bad result’ that the family had with both their other children. In spite of very bad roads from Daltonganj to NJH – the family somehow got hold of a vehicle to bring them here.
I happened to see SD as she came into labour room. She did look to be in distress. On examination, it was obvious that it was not a vertex presentation. And the uterus was in a constant state of spasm. Ultrasound confirmed that the baby was lying transverse. She was straightaway rolled into theatre after the necessary formalities. I had not asked much of the history.
On opening the abdomen, I realized that I was in for trouble. The uterus was shaped like a inverted pot with a long neck. It was obvious that the lower segment was hardly stretched and the baby was fully in the uterine body. I was not sure whether the lower segment will expand enough to deliver the baby. I opened a bit high closed to the uterine body.
To my horror, the bag of membranes was black in colour. It was meconium and the baby was caked in it. I already told someone to call Dr Nandamani to help with the resuscitation of the baby. The presentation of the baby in a tonic uterus made the extraction of the baby quite difficult. Somehow, I delivered the baby.
Dr Nandamani was quite fast to come to theatre and he did quite a good job with the resuscitation. As I started stitching the uterus, the nurse anesthetist was already talking with the patient on any other relevant history. It seemed that the kind relative had given her intravenous fluids and couple of injections to increase her pain. 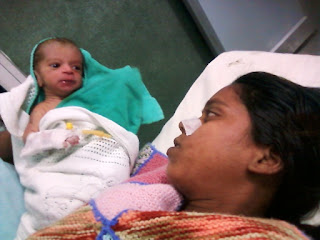 The baby was lucky to have made it.
Quite a number of lessons I learnt from this patient. The importance of ensuring that a patient has a pleasant experience during an interaction with a healthcare provider is quite key to her trusting hospitals and doctors at a later stage. Communication regarding identifying danger signs in babies is quite important at the time of discharge of mothers after delivery. Cash transfers such as JSY motivates patients for institutional deliveries, but as I wrote earlier, we need to ensure that their experience is quite pleasant. Of course, there are more lessons I would need to learn from such patients.
Posted by Jeevan at 5:39 PM