Well, couple of days back, the last Thursday to be exact, I was called in to help Dr Johnson in his duty. Dr Johnson was operating. And there were five patients coming together into Emergency - quite a crowd for any ER.

The first two who came were couple of drunk city kids on their way to a marriage function in Daltonganj. They had not seen some road work happening and had skidded over a barrier which was put up. They did not have much problems other than some contusions and minor lacerations.

Soon came in this family - mother and two children burnt. The culprit - a burst kerosene lantern. Nobody was quite sure on how it happened. The mother, in her late twenties was badly burnt in her left arm. Another girl was burnt a little over the back and buttocks.

The saddest part was the boy in the house, 8 years old. He was burnt all over - Nandamani calculated 89%. The family was devastated. We thought that he would die soon. It's Monday evening today. He's pulled through so far. We are just managing him symptomatically. There is hardly anything we can do. Nowhere is there any skin to do a graft.

The worst part is that the rest of the family is that the mother is so depressed that she is not willing for her own treatment. Even Nandamani was in depression . . .

When I gone for the Burns Retreat in Sylhet, Bangladesh, there was so much discussion about the kerosene lantern - called 'kuppi batti' in that area.  It causes quite a lot of the burns that we see in this part of the country too . . .

There are crude ones like the one below. Many a time, they are just old bottles with a wick screwed on the top. 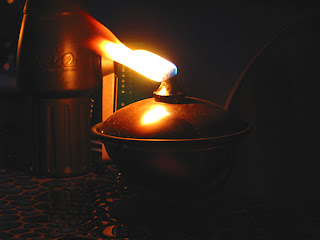 And then there are the better 'safer' ones like the one below. Many people think that they are safer than the above ones. Of course, safer if used properly. I've had many instances of these bursting. Even a personal experience of one bursting in front of me and I getting away without much injuries.

Well, the problem as far as I realise occur in 3 ways -

The first one, is a problem with cleaning of the wick and the lamp regularly. Many a time soot accumulates and sometimes some foreign body especially insects get entangled within the soot. If you don't do the regular cleaning, the soot along with the foreign body mixes up with the oil and catches fire - resulting in the lamp getting burst. Almost functions like a Molotov cocktail.

The second one, is the issue with getting good quality oil. Unscrupulous traders mix diesel or petrol or even old cleaning oil along with the kerosene oil resulting in bursting of the lamp during use due to differential inflammable temperatures of the different oils. 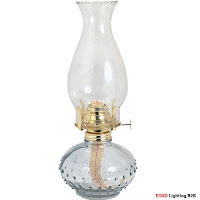 The last problem and the third one, which is more common occurs due to someone tipping over the lamp, especially when it is kept on the floor. As you can see, most of these lamps come with a small base which tips over fast. . .

Many a time I wonder why we can't mass produce cold sources of light and distribute them as part of the Public Distribution System of the country. . . We can save many a family from getting burnt . . . 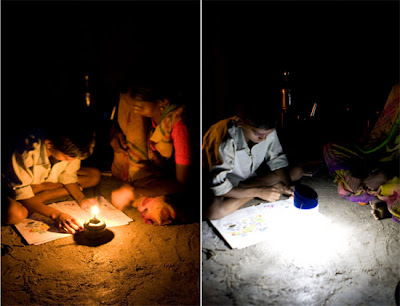 It is so depressing whenever I see one of the relatives of the family . . . The family is so poor. They cannot afford anything unless the father goes for some manual labour . . . Oh my, oh my . . . Why do I see things like these ? ? ?
Posted by Jeevan at 7:10 PM