Over the last 3 days, we had 3 obstetric patients – each of the patients presenting some facet of reasons maternal mortality and morbidity continue to ravage third world countries, including India, who sees itself as an emerging superpower.

JK, 25 years old, married for 4 years and into her 3 pregnancy had been coming to us for regular antenatal check ups.JK had two major issues. On her first visit, which was at around 28 weeks, she had a haemoglobin of 5 gm% and she had severe kyphoscoliosis. We had taken a decision not to take her case at NJH – the question was about doing a Cesarian section with such a low hemoglobin as well as ending up with a child with severe growth retardation.

Nevertheless, she came for couple of more visits. And the final one, she came with mild labour pains. She continued to remain anemic and we referred her off to Ranchi on Sunday last.


It was a busy Monday and suddenly we had a commotion in the labour room. JK had come back – she was pouring out blood. There was no time to hear what had happened. We were wondering what to do, but we needed to act fast. One of the relatives told us that she had couple of blood transfusions at Daltonganj.

Daltonganj? ? ? What was she doing in Daltonganj? We had referred her to Ranchi. Well, this was not the time for questions. Someone shoved a sealed packet of blood to me . . . ‘We had arranged 3 pints. Only 2 pints of blood has gone. The doctors at Daltonganj had told that something can be done only at NJH . . .that is why we rushed’, panted one guy, whom we later realised was JK’s brother. . .

I checked the Fetal Heart . . . for 5 seconds. Must be around 80-100/min. The bladder was full . . . Then, she told that she felt like straining . . . There was only one diagnosis I could think off. . . The baby was on its way and the placenta had seperated . . . I decided to do a per vaginal examination. I was right. The vagina was fully dilated . . . But the head was a bit high up . . . Then, I realised that I had an advantage. The head felt a bit smaller for the quite spacious pelvic outlet.

We decided to put in a vacuum for pulling out the baby. . . And to the glory of God, it worked. The baby was of course sick . . . The placenta came out along with the baby. . . She had lost quite an amount of blood. I realised that the baby had also lost blood. . . The baby’s hemoglobin came as 10 gm% – whereas it should have been around 15-20 gm%. And the mother’s was 8 gm% after we transfused one pint blood today. 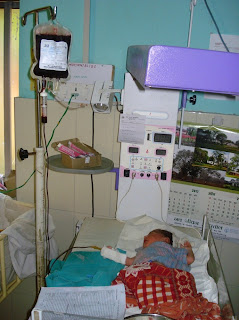 As soon as JK’s drama was over, came in an eclampsia patient, MD. Unlike many of our Eclampsia patients, this one was of a different genre. The patient with only home based antenatal care had started to have seizures since 6 in the morning. The quack who was doing the antenatal care was summoned. He gave some treatment and his prescription is given below . . . 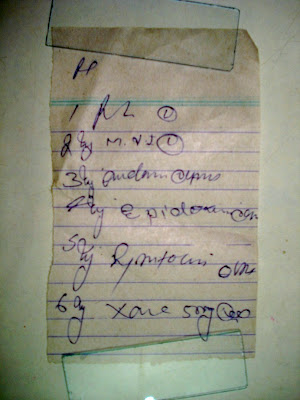 There were 3 more episodes of seizures from morning till mid-afternoon. After the last episode she became unconscious. And that was sometime around 12:00 pm and then the family took a decision to take her to NJH. By the time a vehicle was arranged, it was 2:00 pm. She was brought in at around 5 pm yesterday. On investigations, it was evident that she already showed low platelet counts and increased liver enzymes. She was already going into HELLP Syndrome. We asked the relatives to take her to Ranchi which they refused.

We asked them to arrange blood. But she was worsening. As usual – with a death on the table consent, we took her in for Cesarian section. The baby was caked in meconium, weighed a measly 2 kilograms – required quite a good resuscitation attempt. She could be easily weaned out of the ventilator. However, her blood pressure remains high . . . Please pray that she would make a recovery. Meanwhile, her platelets had come down to 45,ooo today morning. We sent the relatives for few pints of platelet rich plasma. . .

The last one was the most terrible one . . . At least we can console ourselves that the previous one was managed by a quack and therefore the 'near maternal miss'. Let's look at the 3rd one . . .

The lady, RD, who was G3P2L2 had presented dramatically with bleeding per vaginum at 36 weeks in emergency. Both her previous deliveries had happened by Cesarian section. She was on regular ante-natal check ups elsewhere. She had couple of ultrasound scans. Both of them were normal. Below are scanned copies of almost all antenatal check ups she had.


I have tried my best to remove any evidence about the concerned doctor/ultrasonologist who saw her before she turned up in emergency here. 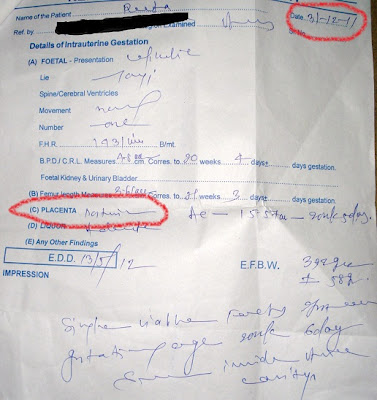 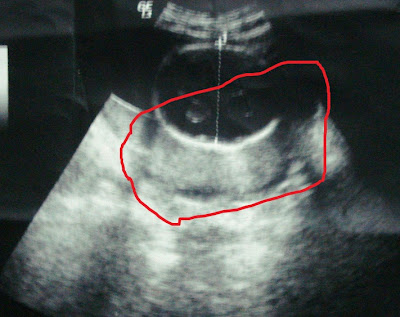 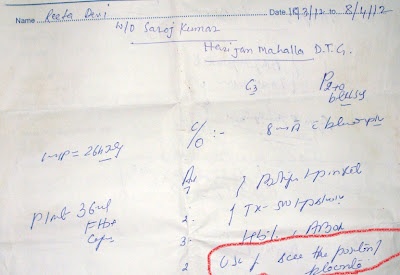 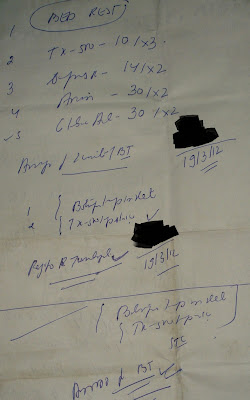 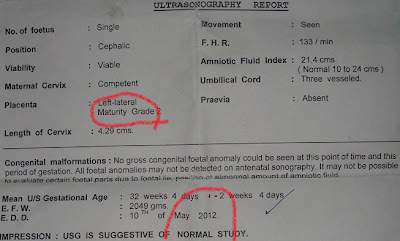 Well, we repeated the ultrasound and what did we have - a placenta praevia. The paradox was that she had films printed of one of the outside ultrasound scans and it clearly showed placenta praevia, whereas the report did not mention anything about it.

Worse was the blood report. There were 3 reports from the same place within a period of 14 days all of them showing varying values. You can make your own inferences. The scanned copies are shown below. The names of the ‘shops’ have been scratched out for posterity’s sake. 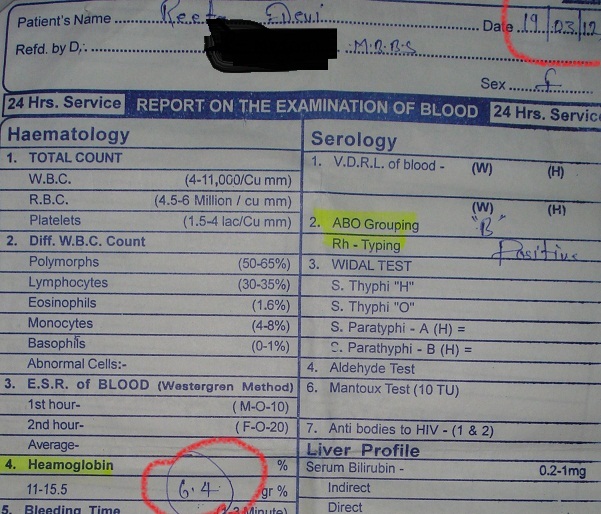 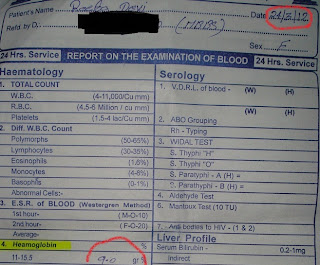 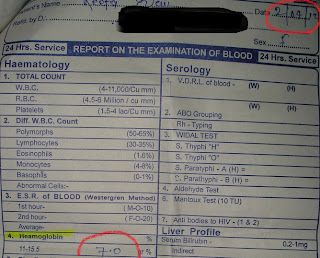 3 patients – each of them showcasing myriad shortcomings in our healthcare system . . . The sad part is that almost all of these shortcomings pertain to the basics . . .

JK’s case brought into the fore the following issues -
- Need for well run secondary care centres (if possible tertiary care centres) at district level.
- Need for Blood Bank facilities. One may need to relax few of the present regulations for licensing so that blood will be freely available.

What did MD have to tell us?
- Most of our populations live in remote regions without any basic facility of healthcare. They are dependent on the quacks for their regular medical care. Operationalising sub-centres and training ASHA workers and ANMs is a major challenge.
- Transport remains one of the major challenges in almost all our rural areas. Many of our states have circumvented this issue by 109 Ambulance. In Jharkhand, we have something called the ‘Mamta Vahan’. I’m absolutely certain that we need to look beyond the ‘Mamta Vahan’.

And the last one RD?
- You cannot blame RD for the quandary she is in. The healthcare community let her down.
- 2 ultrasounds and a Grade 3-4 Placenta Praevia missed.
- Varying reports of hemoglobin from a single laboratory in a space of 14 days.
- No mention of RD being a high risk patient in any of the prescription charts.

As I had told in one of my previous blogs, the quality of healthcare is a major issue in almost the whole of the country. Each day, it is not uncommon to see diagnoses being missed, unnecessary investigations being done and lack of technical knowledge in paramedical services mainly laboratory and radio-diagnosis. Hope you remember one ASHA worker who failed to recognise her own complicated pregnancy and paid with her life.

Well, sorry for the quite long post. Before I sign off, just a passing reference to a law that is coming into force. The Clinical Establishment Act. More of that in my next post. Already in force in Assam and Orissa, it could sound the death-knell for hospitals such as NJH. . .
Posted by Jeevan at 11:03 AM