On the 15th of August, (last Thursday), I had the unique experience which not many would live to tell.

I got hit by lightening. 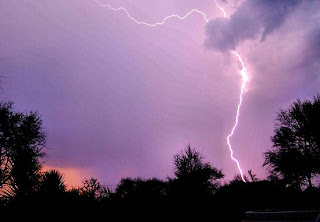 We're almost sure that we would be going in for a drought this year. However, on the evening of 15th August, we had a very heavy downpour. There was a bit of accompanying thunder and lightening.

The downpour was quite a good one that there was a lot of water flowing in from the road. I was quite concerned about our pond which is in quite a sorry state as of now. Unless we get at least half a dozen of similar showers, all our plans of fish farming for the year would go awry.

I wanted to ensure that the drains which bring in water from the roads were all clean and water was flowing in. As I walked to the gate, there was the most spectacular lightening I ever saw. Along with that was a numb feeling of tingling I felt from my head to the toe which lasted for a fraction of a second. For a moment, I thought it was the second coming of the Lord.

I felt quite dizzy and sort of stunned. I could not open my mouth. I held on to the wall near the gate. And said a small prayer. Soon, I was sort of back to my senses. I had brought with me one of our maintenance helpers to help out with clearing of the drain. I realized that he did not realize what had happened.

I was also into one bout of a viral fever, that there was quite a lot of confusion about what was happening. By night, there was severe body pain. I took an ECG to find out if there was any conduction abnormalities. Thankfully, there was none.

Today morning, as I opened the newspaper, the front page told me very well that I was very very much blessed to have escaped the lightening strike. 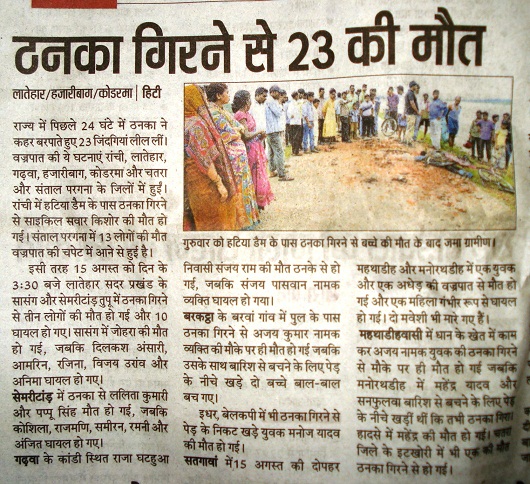 The news said that 23 people died following lightening strike the same evening in different parts of the region.

I know very well that I am very much blessed. The Lord has been so gracious. All praises to Him and Him alone.
Posted by Jeevan at 3:18 PM