'In the olden days we never fell ill. We worked and worked hard. We did not feel the heat of the sun in the middle of summer nor the chill of the winter. Our elders lived to ripe old ages and our women were much healthier. We went walking to distant lands and would never get tired. We ate things we cultivated in our fields and drank the water from the streams which passed through our village'

This is a common refrain that I hear again and again in agrarian communities of different parts of the country . . . . Kerala, Tamil Nadu, Andhra, Maharashtra, the North East and now Jharkhand.

They continue - 'not anymore. Our young men do not like to work. In fact, they are not strong enough to work hard. They are tired always. They find it difficult to walk on foot to the next village. They prefer to sit chitchatting and day-dream. We cultivate new things in our fields about which we do not have much idea. Our water bodies are dry most of the time and when they are full, the water is polluted . . . And to top it all, we have diseases which we've never heard before . . .

If one has the time to listen, there are umpteen stories of change that a wizened old man in a village can narrate.

Having served in the area of healthcare for the last 10 years, the major issues that seem to have changed the susceptibility of the population to poor health and diseases all point to malnutrition as the primary cause.

Many of us think about malnutrition as only a condition which occurs when there is a shortage of food. However, that is not the case. It means much more than that. Classically, it is defined as the condition that results from eating a diet in which certain nutrients are lacking, in excess or in the wrong proportions.

In almost all the rural areas that I visited, I was shocked to find out that in the olden days rice was only one of the options of the cereal in the diet and wheat was quite foreign in many regions especially in the south of the country. There were other choices which got wiped off with the advent of the green revolution. The green revolution guaranteed wiping off hunger and ushering in prosperity to farmers.

We all thought that we had hit the goldmine.

Not any more. The high prevalence of non-communicable diseases in the country points to a different story. The high calorie diets of rice and wheat based food brought in diseases such as diabetes and high blood pressure and also ensured that the we became deficient in micronutrients and vitamins.

What exactly were the other choices of food which our forefathers had?

In Tamil Nadu, they talk about the good old days when Thinai (foxtail millet) or Pani Varagu (proso millet) with milk were common diets. Village born and city bred folk talk about the 'kool and kali' made out from finger millet (ragi) and pearl millet (bajra/kambu). Come to the north of the country, and they talk about the Thopa Roti made out of finger millet (madwa), the Gundali rice (another local millets) of yore and the Kodo rice which ensured that hunger stayed far away. 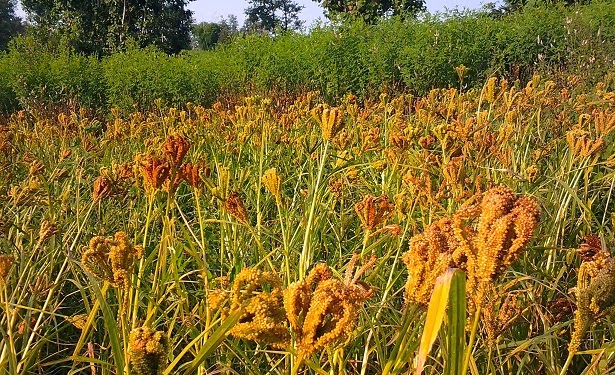 As I talked to scientists in this area, almost all of them expressed helplessness in ensuring that these grains remained in common use. However, there has been major breakthroughs in the cultivation and propagating the consumption of millet grains like finger millets (ragi/madwa). However, there are many other types of millets which are unique to certain parts of the country. Unfortunately, many millet varieties are on the verge of extinction.

Why are they so precious to us? And there one would find the answer to the hardiness and the disease resistance that our forefathers possessed. High in vitamins and micro-nutrients, these millets are virtual store-houses of immunity.

The table below is quite self-explanatory . . .

And it is not surprising that millet based porridges like finger-millet porridge is much recommended as good weaning food for infants.

Now, there is one more angle to the story of millets. And this is the nature of the crop to withstand drought and for the grain to resist pests. Which makes it all the more an answer to climate change and farmer distress.

I'm glad that Dabur has given an opportunity to put this write-up. I'm sure that millet based diet is going to play a major role in building a stronger, healthier and a more immune India.