Baking was a new thing for my wife. She got the bug of baking cakes while as part of her post-graduate studies she spend 6 months in the Pathology Department where couple of consultants gave her quite vivid and juicy descriptions about the joy of baking cakes. My taste buds prayed quite a bit that she would take up this as a serious routine in our home.
So, one of the first new possessions that we brought after we shifted from Vellore to NJH was the Murphy Richard’s OTG (oven, toaster, griller). With internet around, it was not so difficult to find good recipes. Being quite away from town was a bit difficult especially when it came to procuring the baking ingredients especially butter. Occasionally, we used to get Amul butter – but it was not recommended because of the additives and the salt.
There is a good shop in Ranchi where we could get fresh butter. So, when someone made the long trip to Ranchi, at least a kilogram of butter was a constant order.
It did not take long for our kids to develop a liking for cakes. Considering the fact that we could not make cakes often because of butter not being available regularly – cakes were always in good demand when they were made. Both of them particularly took a liking for the eggless variety of chocolate cake which Angel modified quite well even with the addition of eggs.
Our first challenge was Shalom’s birthday party last September. The problem was about trying to decorate the cake. We wanted to make the cake as well as decorate it. That was when we found out that we could use colour coated chocolate bits marketed under the trade name ‘Gems’ could very well be used. It has become a favourite with both the kids. When Charis had her birthday celebrations in April, Shalom was quite clear about what type of cake we should have. 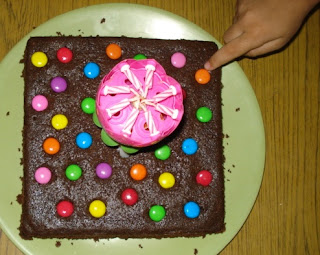 However, the kids have discovered that the joy of baking cakes is actually in waiting to lick the batter before the cake is baked. 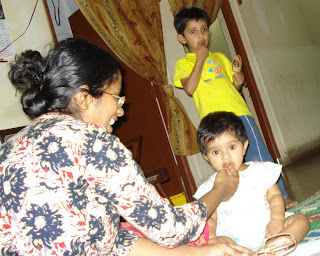 Shalom discovered it on his own. Charis needed a bit of introduction from Angel. However, now Charis is the dominant player as you can see from this picture. 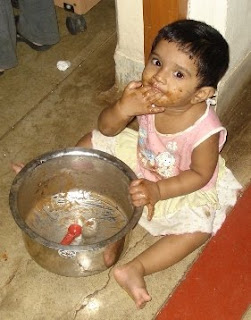 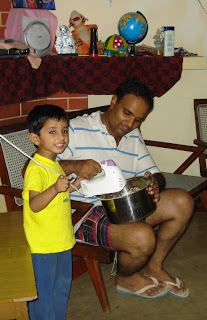 Initially, baking cakes used to be a family event. Unfortunately, of late, I’ve not been able to take part because of the workload in the hospital. I look forward to a day when I can be part again of the fun of baking cakes.
Posted by Jeevan at 9:59 PM