A common feature in many Indian towns, rikshaw pullers is quite a impoverished lot. I fondly remember my school days in Kollam, where we used to go to school at St. Joseph’s in a rikshaw. I forgot the name of our rikshaw puller – but he was associated with bidis (rolled up leaves of tobacco), alcohol and a characteristic smell of sweat.
As I started my career in healthcare, I learnt further about the plight of rikshaw pullers in many places of the country. In the EHA meetings, I came to know about the special clinics which were run for rikshaw pullers in few of the units. Tuberculosis and other diseases related to tobacco and alcohol abuse were the most common.
The other day, I happened to pick up a good conversation with a rikshaw puller in Ranchi. PL was from Gumla district and had been peddling his rikshaw in Ranchi since the last 20 years.
Like quite a number of rikshaw pullers whom I have known in my travels, I found out that PL was educated for his profession. He claimed to have started doing his graduation when he was forced to enter some profession to bring food to the family table.
Having younger siblings, the onus of providing education for them was upon him. He came down to Ranchi and started working in odd jobs before being initiated into rikshaw pulling.
PL worked quite hard. He married 10 years back. He brought 3 cents of land in Ranchi and set up house. He has two children – a 8 year old girl and a 3 year old boy. He has dreams for his children. I was glad to hear that he was bent upon sending both of them to school.
I ultimately asked him about the alcohol problem which is much prevalent among rikshaw pullers. ‘Sir, it comes along with the profession. Without some alcohol in the blood it is very difficult to get sleep in the night. My whole body pains if I do not have the stuff.’ – the typical answer I hear from almost all the rikshaw pullers I’ve encountered.
PL works quite hard. He earns about Rs 200 per day. His wife works as a part time maid in couple of houses. She earns a total of Rs. 1000.
PL was quite satisfied with his life. He has been responsible towards his family. Of course, he could not rise up to the levels which most of his younger siblings have come up to. Couple of them is in the armed forces, one of them in the police and one of them is even a teacher.
I asked him if his younger siblings help him out if they are times of need. He replied, ‘I do not expect them too. Times have changed. Everybody is quite busy raising his own family. There is so much of time invested in raising up children. So, all of them are busy. I get to see them couple of times a year, during Christmas and Easter.’
My journey was quite a short one for any more conversation. PL wanted to know whether I was a journalist. He told me that I look like one. Before I had replied he went on to request that I write a story about him. He was already ready posing before his rikshaw for a photograph. I did not have my camera. However, managed one snap with my mobile phone camera. 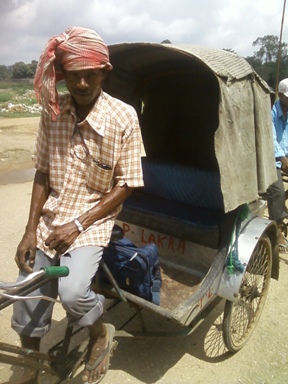 I asked him what I should write about him. He told me that he wanted the world to know that there are people like him who work hard without getting involved in any corrupt practices to make a clean living. He has only given to whoever has come along his life.
I’m amazed at people like PL. We read quite a lot about politicians, government officials, policemen etc. who are corrupt. But, it is heartening to know that people like PL exists, who believe in the ethics of working hard and giving their all for the sake of the community.
Posted by Jeevan at 10:47 AM