However, there are major challenges, especially in rural areas.

As part of our Community Health project aimed at building up resilience in the local communities against Climate Change, our team was involved in exploring opportunities for income generation. One theme that was echoed across almost all sections of the society was backyard poultry. Initially, it was about vaccinating the birds from Ranikhet (Newcastle disease). We got some success by going for vaccination campaigns. But, we found out that there was couple of pertaining issues which needed to be sorted out.

The first issue was of predators which preyed on the birds when they scavenged during daytime and even at night. There were incidents of wild cats entering chicken coops made of mud and killing off entire flocks of birds. The other predators were snakes and various species of rats and mice.

The second issue was of sustained feeding of the birds. Because of irregular and erratic food availability, the birds took time to gain weight and therefore were not economically productive.

The third issue was of diseases - the main disease being Ranikhet (Newcastle disease).

We thought quite a lot about solutions. It was very obvious that with a bit of change in practices and discipline we could tackle the second and third issues without much problem. The major issue with the first issue was to make a cheap chicken coop which will keep out wild cats and snakes. There were quite a lot of designs available in the internet to make quite beautiful chicken coops. The problem was the enormous cost.

While I was in Kerala, I saw advertisements for cage like structures to keep 4-6 chickens that cost about 2500 INR (40 USD, 25 GBP, 35 Euros) to make. The monthly earning of an average family in our nearby village was hardly 2000-3000 INR. And most of the poor earned less than that.

It was obvious that we had to think of a new design. Dinesh, our maintenance manager and I ultimate came up with a design. We decided to try it out ourselves as well as among few families within the campus who consented to try it out. We had no inkling about the success.

The contraption was quite simple. We got 3 feet wide chicken mesh, which usually came in rolls of 50 feet. We made cylinder structures using these mesh with a diameter of 3 feet, height of 1.5 feet and circumference of 9.4 feet. On the top of the cylinder, an opening was made with a mesh door. There was no use of any other frame for this cage. The cost of one cage came to around 650 INR (10 USD, 7 GBP, 9 Euros). And it could comfortably house 6 chickens.

Our family has already kept 4 batches of chicken (each batch of 6 chicks) over the last 5 months. And it has been a roaring success. Many of our staff tried it and are quite happy about it. Then, we moved out from NJH to Barwadih. Quite a lot of people who saw the cages were very impressed.

And slowly people started to enquire on where to procure these cages. And we started off a small industry. The priests at the Catholic Ashram, Barwadih were very helpful. We trained few local boys to make them. 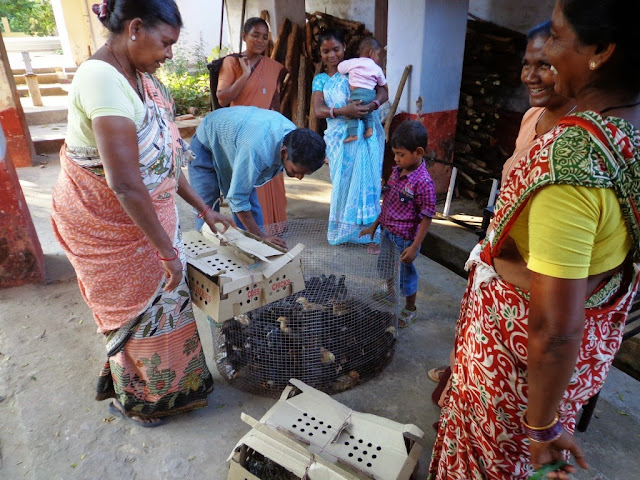 Well, I’m sure there will be people who will be interested to do this in other places. As of now, we’ve this being made at NJH and Catholic Ashram, Barwadih. There are 3 more places where few of my friends are exploring on start promoting this.

The challenge is to have some funds to start off and to find the right people.