This is the translation of a news item that was published inthe Malayalam daily ‘Mathrubhoomi’. I thought that the piece was worth anEnglish translation for the benefit of people who do not read or understand Malayalam. 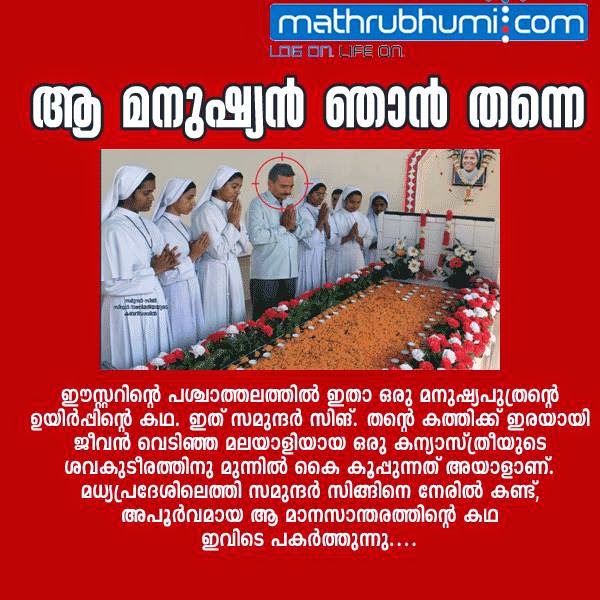 His name was Samundar Singh. I met him on the 25th of February at Mirzapur village in Madhya Pradesh. It was the 20th anniversary of the death of Sr. Rani Mariya, who hailed from Kerala. He held a rose in his hands and was on his knees praying in front of the grave of Sr. Rani Mariya. His eyes were filled with tears. In between, I saw that his body was trembling. The rose he held in his shivering hands also trembled.

The incident happened on 25th February 1995. Sr. Rani Mariya, who hailed from Perumbavoor Pulluvazhi in Kerala was killed in the midst of a journey from Udaya Nagar to Indore. After being stabbed multiple times inside the bus, she was thrown out of the bus. As the bus traversed through the remote Nachanbora plateau, Samundar Singh was accompanied by Jeevan Singh and Dharmendra Singh who planned the murder.

The murder of was the ‘prize’ that Sr. Rani Mariya, daughter of Mr. Pylee and Mrs. Eleeshwa of Pulluvazhi Vattalil, who was a Franciscan Clarist nun, received for her social service. Sister Rani taught lessons aimed at self sufficiency to the very poor who were used to dragging the plough along with the bullocks. Most of the villagers were agriculturists who were doomed into poverty by cut throat money-lenders. Sr. Rani empowered them by teaching about loans from the bank and new agricultural practices. She succeeded in organising them into co-operatives and self-help groups. She taught hygiene and sent their children to schools. She held special classes for the women. To those who were dragged into lawsuits by rich landowners, she provided legal help. As a natural course of events, her actions embittered a section of the society which ultimately led to her gruesome murder.
Samundar and his friends were arrested. However, only Samundar was convicted . . . for life imprisonment. Those who schemed with him escaped for lack of evidence. His friends did not care for him. His wife left him. Samundar lived in the Indore Central Jail.

21st August, 2002 was an unforgettable day in Samundar’s life. It was Rakshabandhan day. A guest came to visit Samundar around 5 pm. It was Sr. Rani’s younger sister, Sr. Selmi. She tied rakhi on the same hands that drove the dagger into her sister’s body, thereby accepting him as her brother. She kissed the hands that shed her sister’s blood. A shaken Samundar held her legs and asked for forgiveness. Crying loudly, he wailed, ‘Forgive, sister . . .forgive me’.

‘I forgave you long time back’, Sr. Selmi told him. ‘God would have forgiven you. You should not give up. We’ve been praying for you everyday’.

After sharing the sweets Sr. Selmi had brought, as Samundar left back to his cell, he was a changed man. The meeting between Sr. Selmi and Samundar was arranged by Fr. Sachidanandan, who devoted his life to the service of the jailed. Sr. Selmi later commented about the occasion as a deep experience of love and forgiveness.

More memorable days were in store for Mr. Samundar. On the 24th of February, 2003, Sr. Rani Mariya’s mother Mrs. Eleeshwa and brother, Mr. Stephen came to meet Mr. Samundar. Sr. Selmi accompanied them. Mr Samundar burst into tears as Mrs. Eleeshwa kissed his hands and told him, ‘My daughter’s blood were on your hands. It’s a blessing to have kissed them’.

The next day was the 8th anniversary of Sr. Mariya’s death. Cardinal Varkey Vithayathil informed the audience on . . .

(I shall continue the translation of the article some other day. It's been quite a busy day. You can read more about the story in other websites . . .
1. Asianews
2. Wikipedia
3. Indian Express
4. Film: Heart of a murderer)
Posted by Jeevan at 6:53 PM