Referred by a Jhad Phuk

Couple of weeks back, we had a young boy wheeled in. It was late evening, just after we finished our outpatient work.

The history was that of a bite at dawn while he was sleeping on the floor. The boy had seen the snake slightering off into the dark but could not identify it.

As is common practice, he was taken to the jhad phuk who did his chanting and gave some medicine. He proclaimed that the boy was free of any poison and therefore sent him home. The family did not make much about the snake bite and took him home.

At home, our dear friend started to feel quite funny. He noticed that he was having difficult keeping his eyes open as well as there was a funny feeling on his throat. He thought that it must be something which he ate that got stuck in his throat. By the time, school was over late afternoon, he realised that something was grossly wrong with him.

The parents linked the symptoms to the snake bite which he had early morning and took him again to the witch doctor. The witch doctor did his mumbo-jumbo and then proclaimed that it does not look like a snake bite, rather it looks like a Bengal Monitor bite. He washed his hands off the patient and asked them to take him to a proper hospital.

After a visit to one more jhad phuk, they arrived at KCH - a full 13 hours after the bite. 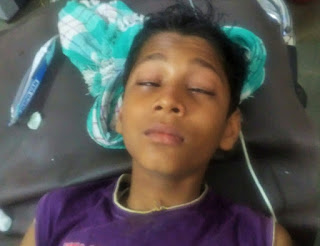 It was a very obvious neurotoxic bite. I conveyed the diagnosis to the relatives and gave the option of treating or taking to a higher centre. Well, you may be surprised that I gave them the option to take to a higher centre. The reason was that there was a very portly and goon looking gentleman among the bunch of relatives who argued with me that it was not a case of snake bite.

He told me that the jhad phuk whom he went was a very famous witch doctor and his success was 60-70% - which meant that 30-40% died! That gave me enough ammunition to discredit the jhad phuk – I told him that the jhad phuk will have a better success rate if he left the patient alone, because of 100 bites, only 15 bites would be those with envenomation and of that too only 4 will die without treatment.

The printed material on snake bite which we had prepared recently was a great help. I was glad that there were couple of our previous patients who had come for dressing of their cobra bite wounds who supported my view.

Ultimately the family decided to stay at KCH and allow ASV to be given. Thankfully, he recovered well overnight. However, the surprising thing was that the next day night, his mother and elder sister also sustained snake bite and come to us straightaway. Thankfully, there were no signs of envenomation in both of them. 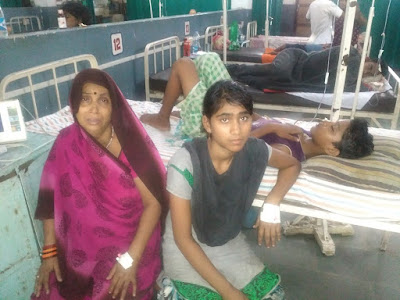 Recently, we've had been having discussions about how to manage snake bite. There are quite a few people who believe that it should be according to identification of the culprit snake. However, I believe that the approach should be based more on the clinical presentation. The case of the chameleon bite and this case is ample evidence in support of a syndromic approach.

After 48 hours in the hospital, the young boy was ready for discharge. Although it was a krait bite, he ended up with a bandage as the quack had made quite a few deep incisions around the bite site. 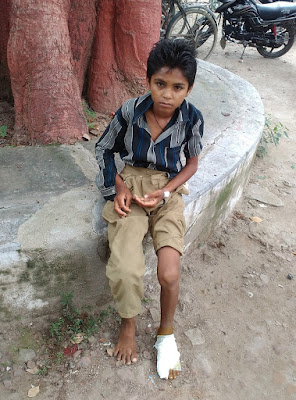 It was quite heartening to see the relatives thank us for opening their eyes on how the witch doctors exploit poor village folk.
Posted by Jeevan at 8:19 AM