The other day, we had one visitor comment that there was so much happening at NJH more than what was being put up in the blog. Of course, it's become so busy that I have lost count of the amazing miracles that we witness each day. The other day I read somewhere that once you start counting your blessing, you'll loose count. Therefore, I ain't complaining.

And all praise to my team of clinicians Drs Nandamani, Ango, Titus, Johnson, Shishir and Kumudh who silently labour on without a whimper. The support received from the nursing staff especially the theatre team is amazing.

Just as I was getting out for a proposed half day leave today, Mr. Selvin, one of our nurses came in with a patient's chart who he thought would require some amount of charity.

I was stunned on seeing the chart.

It was of a case of a rupture uterus with a alive baby.

The story . . . It was not even one year since Mr. Gopal Yadav and his wife, Mrs Kavita Devi from Tarhasi village which is about 40 miles from NJH, lost their newborn baby. Mrs. Kavita had undergone a Cesarian section at a private clinic. They are not sure of the indication. The only thing they knew was that the baby was so sick that the obstetrician referred the baby to Ranchi.

Mr. Gopal did not have enough money and spent almost a day making arrangements. They somehow reached Ranchi the next day, but the baby was dead by the time they reached.

Nobody told them they should wait for some time before trying for a baby. Mrs. Kavita Devi was soon pregnant a second time and she went into labour sometime early morning of 6th July, 2012.

The family took her to the same obstetrician who did the Cesarian on her the first time. She was given some injections. However, by around 10 am, she was told that there appears to be some problem and the uterus seemed to have ruptured.

Someone advised them to rush to NJH as soon as possible.

They reached NJH Emergency at 12:50 pm on 6th July. It did not need much of an examination to suspect a Rupture Uterus. Dr Nandamani was quite fast. The baby was delivered by 1:40 pm. The uterus had ruptured with a hematoma of the right broad ligament extending to the urinary bladder.

The baby had an Apgar of 2 and 4 at 1 and 5 minutes. The resuscitation was quite good. God's amazing grace and the excellent care at the new NICU ensured that the baby recovered fast.

The family could not afford the full bill. Thanks to the Grace Babies Charity, we would write off the baby's bill. We wish we have some sort of Charity fund from which we could write off maternity care expenses.

There have been more unfortunate cases where women end up living terrible lives because of poor obstetric care or lack of care of any sort. However, for Gopal Yadav and his wife, they have been blessed because of NJH. We are thankful that we are called to be a blessing through the service given at NJH. 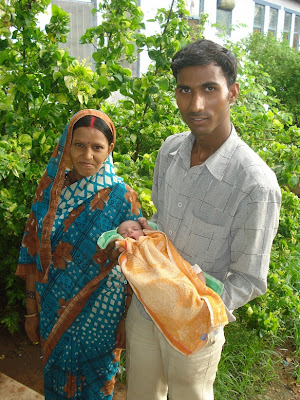 (The names and the photographs were put after taking permission from the patient and her family)
Posted by Jeevan at 5:46 PM