The last 2 days, I had a very unique problem with 2 patients.

The first one was a young lady who had come in unconscious since the last 24 hours and was being managed elsewhere. There was no definitive diagnosis. From the history and examination findings, there were only 2 possibilities. . . It was either a pontine bleed or an organophosphorus poisoning.

The relatives vehemently denied the possibility of a poisoning.

As she was not breathing well, we had her intubated in no time. While intubating, we noticed that there was quite a lot of secretions in the airway.

Nothing much happened initially. We had given the option of a referral which the relatives were not very much interested in.

We weighed the options and started off her on Atropine to which she amazingly responded. By today morning, she was sitting up and it was quite heartening to see the sight . . .

Later today, a little boy came in gasping, frothing from the mouth and with pin point pupils. He had eaten some poison which was kept on the window ledge. Here, the parents were sure on what was eaten. . . For me, it was pure organophosphorus. He responded to the same management which we gave for the former lady except for the ventilation.

This is the fourth or fifth time that patients have come in after ingesting poisons accidently (at least from the history). I remember one of them which I thought was homicidal.

I remember being taught that free availability of poisons is one of the major causes of accidental and self inflicted poisoning in most of the Asian countries where it is common.

When the parents of the boy showed me the sachet of the poison, it was not difficult to realise the reason on why accidental poisoning is something we need to consider seriously when patients come unconscious to our emergency rooms.

Below is the snap of the sachet. 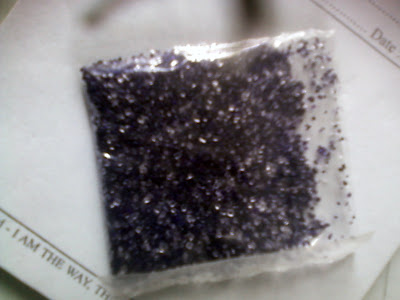 A common practice in India to decrease the cost of purchase of many an item, sachets such as these are quite a dangerous thing. Taken out from their original packing, these poisons are repacked into unlabelled packets. I showed it to couple of our staff who use pesticides for farming purposes. I asked them about the poison. They did not have any idea other than that it was very good to kill houseflies.

The shiny substance inside the sachet is quite attractive for children. Many a time I've seen liquid pesticides repacked inside empty cough syrup bottles. Last year, we had one young man who claimed to have unknowingly drank Malathion which was stored inside a cough syrup bottle. He was lucky to have made it alive.

In the prevention of pesticide poisoning, one of the concepts being promoted is to ensure that purchase of pesticides be monitored and there is community based storage of pesticides. Of course it is important. However, more important is the need for public awareness not to store it outside their labelled bottles or sachets and not to sell or store pesticides in loose unlabelled packets.

Well, regarding the first patient, the lady - I got a history from her that she was having headache and she had taken some medicine which was given to her long ago. . . She does not remember anything after she took that medicine. My hunch is that she has taken some organophosphorus poison which was kept in an unlabelled bottle. In fact, we had got the history of a headache from the husband . . .from which we had kept the probability of a intracranial bleed -  a pontine hemorrhage because of the pin point pupil . . .

So, any unconscious patient from now on . . . we would be looking at possibilities of poisoning seriously.
Posted by Jeevan at 12:08 AM