We are all well aware of how sick our system of healthcare is. While for the rich and the famous, it is nothing much of a major concern . . . for the middle class and the poor, healthcare is a major issue of concern.

However, what concerns me are reasons for the government being only hardly bothered about what sort of healthcare the common man has access to. One on side, we are proud of how good we are with tertiary care and we are looked upon as one of the major spots for health-tourism. We have states such as Tamil Nadu who are looking at up scaling of cadaver organ donation whereas on the other side, we've states where something as basic as availability of blood is a major issue.


I'm a bit concerned about the sort of media attention that issues such as cadaver organ donation, celebrity health issues garner compared to the status of basic public health care in the country. One issue which has been sort of been ignored is the state of tuberculosis in the country. I've taken up the issue many a time in my blog.

Well, you may say that we have the Revised National Tuberculosis Control Programme, a world award winning public health program which has won accolades at many a venue.

I take the issue of Tuberculosis today on account of one patient whom Titus saw in Outpatient today.

The sad aspect was that he did not access the free government tuberculosis drugs. He had quite a large file of his medicine prescriptions. It was quite a sad array of paper work he carried around.

Initially, he was started off only with Rifampicin and Isoniazid. Nobody was there to monitor his treatment. He took medicines for about 2 months and he left treatment when he started to feel better. Then, he became sick again. He went elsewhere and was started on medications again . . .

Unfortunately, by early 2010, someone had sent his sputum for culture testing. Below is the report. 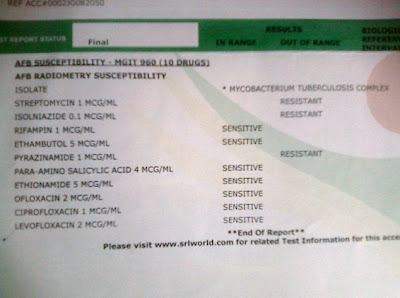 But, I was in for a shock when I saw the prescription from the 'tuberculosis specialist'. All protocols of Multidrug Resistant Tuberculosis was thrown to the wind. It's more than 30 months. He's still on treatment.

And the worst shocker of all . . . He never had a sputum AFB done. . . of course, there was a sputum culture done about 2 years after the first diagnosis. 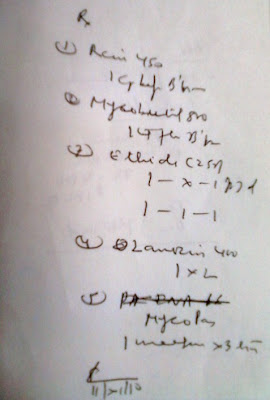 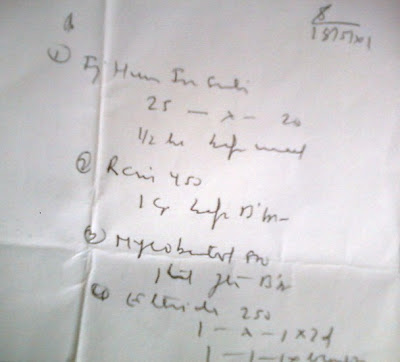 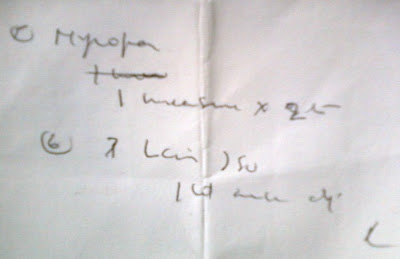 Well, you could blame SDS for not taking interest in the government run RNTCP programme.

But, I wonder why anti-TB drugs of all combinations and dosages are available in the open market when there is a government run programme to combat tuberculosis.

To make matters worse, there are quite a large majority of doctors who openly tell their patients that government medicines are of no good. SDS was told the same thing by every doctor whom he accessed for treatment.

Recently, the government has come out with an order on generic drugs. The pharmaceutical industry has already launched an all out cold war against this. They have even invented a term for generic drugs - 'unethical drugs'. And the branded drugs are called 'Ethical drugs'. So much to educate the common man on the terminologies of drugs.

Well, it was quite incidental that I came to find out that there is no Iron tablets in the Primary Health Centres around our place. But, Iron capsules are available in the Pharmacy shops and they were doing great business. Even, we are doing great business with Iron capsules. I remember that during my stint elsewhere in the South, the Medical Representatives were all out 'educating' us on how unpalatable the Iron tablets are compared to their 'double coated chocolate flavoured' and of course expensive Iron capsules.

SDS is most probably going to pay for his ignorance of the existence of a government scheme which would have monitored his drug compliance and disease progression. Now, he is getting a MDRTB treatment protocol which is totally out of line from what he should be getting.

I'm sure that this is part of the influence of private players who are very well aware of the inexhaustible gold mine of profits made in the name of healthcare. It is sad that the government is not realising the folly it is in by allowing such a back-door entry for private players in healthcare. The influence looks subtle, but the consequences are going to be disastrous for the common man.

The government order on making generic drugs freely available is a decision in the right direction. I was quite encouraged to see the 'Generic drug store' in the Latehar district hospital during a recent visit. I'm sure that the private drug companies and retailers would go on an all out war against it, at least indirectly if not directly. More initiatives such as these are necessary if the common man has to regain his confidence on public healthcare. However, it is going to be quite a long journey for all of us who are mooting for a full fledged robust public healthcare. The question is how many of us are going to continue fighting to see a day when that happens.
Posted by Jeevan at 12:19 PM