The preference for the boy continues . . . 4 stories 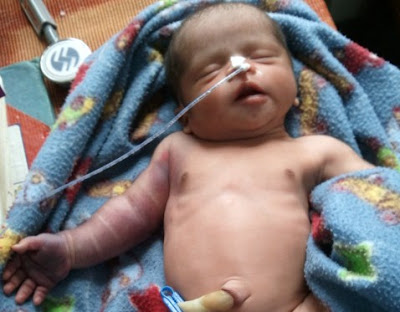 There were 3 cases last week, where I was almost sure that the relatives quite well knew the gender of the fetus that the respective patient was carrying. That was when the 4th one came.

The snap above is that of RD's baby - born sometime early morning today by emergency cesarian section. Yes, you have diagnosed correct. It was a case of Hand Prolapse. She was lucky to have made it alive although sick. However, there was no reason that this baby should have born sick by Emergency Cesarian.

Because . . . RD had come yesterday sometime in the morning with leaking per vagina. And Dr Ango had correctly diagnosed a transverse lie and had asked the relatives for a Cesarian section immediately. The relatives told her that it was RD's fourth pregnancy and she should deliver normal as her birth canal should be quite large enough.

They left for elsewhere. The next thing we know is that RD came with a hand prolapse early morning. I'm yet to find out what all happened in between.

Later, in the afternoon, I had a pep talk with one of the relatives and it was well evident that the family knew the baby was a girl and a Cesarian section was considered too expensive to deliver a baby girl.

However, I'm happy that they came just in time to deliver a live child.

1. 5 days back, some time early morning, there was SD who came with a foot presentation with severe intrauterine growth retardation. SD had been leaking since late night. She had been around for antenatal check ups to quite a number of places - - but the family claimed that no one told them that the baby had growth retardation and had an abnormal presentation. To make matters difficult, they did not have any papers of her antenatal care. The baby was alive . . . I gave them the option of doing a Cesarian section. With much reluctance they gave me permission. The baby came out with great difficulty . . . and was a girl. The family showed no interest in keeping her . . .  Yesterday, they got a discharge against medical advice and left . . . Here again, it was quite obvious from the way the family was behaving that it was well known to them that the fetus was a girl . . .

2. 3 days back, I got a call from Titus who was on duty. There was a very rich family who had come with their daughter who was 8 months pregnant. RS was leaking and was having severe pre-eclampsia. Her husband was working in one of the metros. Titus was trying his best to refer her. In fact, the patient wanted to be referred. Her relatives would have none of it and wanted the treatment to be done here. Her blood pressure was rising and Urine Albumin was already 4+. We gave them the option of a Cesarian immediately. The surgery went well. The baby was in fact term but had severe growth retardation. We offered a referral for the baby, which was not taken was the relatives. However, the husband arrived yesterday evening. Our doctor at NICU, Dr Johnson explained about the baby and he readily arranged for the baby to be shifted to a higher centre. I was glad to see him quite furious with his in-laws for the way they dealt with his wife.

3. Yesterday, we had a lady who came early morning with labour pains. The doctor on duty decided that the contraction were not good enough and gave medicines to accelerate labour. I reached the labour room at around 8:30 am and was a bit concerned with the extra attention that the patient was receiving from her relatives. I also found the uterus a bit funny shaped. As I was examining her, her male bystanders were making a fuss about knowing her latest status. I decided to do a Per Vaginal examination after which I was almost sure that she had an Occipitoposterior Presentation and there was minimal meconium staining of the liquer. And she had not progressed at all from early morning when she came. I told the relatives of the predicament. I could have waited for couple of more hours as this was her 3rd pregnancy and both her previous deliveries had occurred normally. As soon as I dropped the 'Cesarian' word, the family wanted to immediately have the surgery and get the baby out ASAP. I went ahead with the surgery. The baby was a boy. It was quite unusual for the relatives to agree for a Cesarian section that fast

We are all quite aware about the fall of the child sex ratio in the country. The stories I tell here are only the tip of the iceberg. We've had worse experiences. And there are some hilarious experiences too . . .

I'm not sure on where we are heading with regard to the care of the girl child . . . But, someone has to do something . .. ... The issue of the neglect of the girl child is much more serious than what we perceive . . .
Posted by Jeevan at 8:18 PM