The whole of this week has been quite peaceful at NJH compared to preceding weeks. The reasons are manifold . . . First of all there were couple of bandhs, which put us on tenterhooks. Then there was a spate of festivals starting off with the Viswakarma Puja, going on to Teej, then Ganesh Chaturthi and today Karma Puja . . . Still, it was amazing that we crossed 100 patients almost every day.

The biggest miracle last week was VO, the young man who was in the ventilator for almost 6 days. The amazing thing was that he survived a brief period of time when our oxygen cylinders ran out on account of the bandh. It is quite heartening to see him sitting up today morning as I went for rounds.

Later towards the end of last week, our Ophthalmologist's grandson who was born after a high risk pregnancy became sick with unexplained episodes of hypothermia and later hypoglycemia. He was referred to a higher centre where he's on his way to recovery. We praise God.

Today morning, we had a 10 year old boy coming in with a history of 5 days fever. Below is a snap of his investigation report. 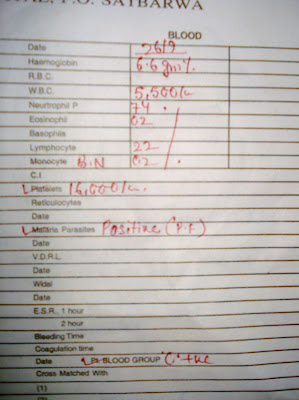 The family had an RSBY card . . . unfortunately, the boy's name was not on the card. However, considering that he was from a neighbouring village, we offered him free admission. Unfortunately, before I could talk to the relatives, the parents too the child home. I hope he makes it.

The family of the young boy is the reason why there has to be a robust public healthcare system. In spite of the fact that we are able to give subsidized treatment to a certain extent, the poverty of our country is such that quite a large portion of our population would be left out if we don't have a system where healthcare would be easily accessible both in terms of distance and affordability.

We have the daughter in law of our retired staff admitted with Preterm Premature Rupture of Membranes at 31 weeks and a baby in transverse lie and intrauterine growth retardation. It is much more than what we can handle . . . but the family is absolutely sure that they don't want to take her anywhere else.  Please pray for the family and the young lady . . .

The best part was that we could finish finalising our calendar for the year 2013 . . . And the day I went to finalise the printing of the calendar, we had a total of about 200 patients in outpatient.

It has been busy, sometimes disappointing, but ultimately a very fulfilling week of serving . . . Sorry, it's only half the week over . . . There's 3 more days left.
Posted by Jeevan at 5:14 PM