The next week, I've received an invitation to be part of a meeting where we are going to discuss about malnutrition in Jharkhand. I shall put in more about it after I attend it and receive permission from the organisers to write about it. I'm quite interested in this as from the agenda it seems that there is some survey findings that this group wants to share with us.

As per the State Hunger Index in India, Jharkhand has the dubious distinction on being second last in the list of 17 states which were studied. In addition, it was terrifying to know that 57% of the children in the state are underweight. I don't know the details.

Well, these are numbers. However, for people like me who dab in clinical care as well as public health, it is not uncommon to keep a very watchful eye on children who come to us for clinical care. And it does not need much experience to put forth the fact that almost 60% of under five children whom we see are underweight. More so if they belong to the tribal population or lower socio-economic status. .

Last week, we had this boy whom we shall call MK. MK was all bloated up. I was on my way to the Palamu Fort fair when the outpatient nurse called me to take a look at this boy. NK was past 5 years,  but was all bloated up. My instant diagnosis was Nephrotic Syndrome. I wrote off the necessary investigations.

Later, as I was at the fair, Titus called me up saying that the investigations have all turned up normal for renal function. No nephrotic or nephritis. I told him to admit the patient.

The next day, I had a re-look at little MK. I could only shudder at what could be a possible diagnosis. Severe Protein Energy Malnutrition. Off went investigations to look at Serum Albumin and Protein. Serum Albumin was 1 gm% and Serum Protein was 3 gm%. His liver parameters and renal parameters were all fine.

We started him on 'food'. Eggs, high energy biscuits, soya bean chunks . . .  The results were amazing. I found it difficult to identify him during rounds. The swelling of his limbs came down. His abdomen which was distended tense became more flabby. His breathing became more relaxed. He had started to walk when we thought of sending him home and to review him weekly. 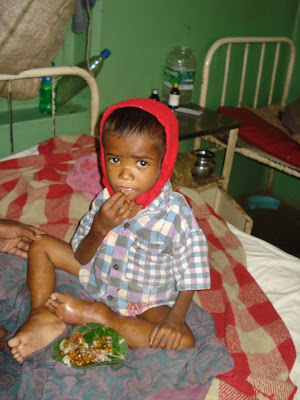 Well, before I wind up this story of MK, I would also like to mention that MK had already been seen by 2 paediatricians and both of them had made a diagnosis of glomerulonephritis . . . put him on antibiotics. The family has been on the run for the last 6 months to treat their child who was all swollen up.

Malnutrition is the bane of rural India. Unhealthy food habits, non-availability of nutritious food, ignorance about nutritional qualities of different food materials, disappearance of traditional food stuff like millets . . . all of these has been factors. Poverty has made matters worse.

And most of the serious disease conditions are many a time because of malnutrition or is made worse and fatal by malnutrition . . . leave alone, the resultant morbidity.

It is sad when the medical profession fails to recognise malnutrition as a disease. In fact, many a time I feel that in our rush for statistics, we fail to recognise individual cases. Lives does not matter to us. Numbers do.

I hope children in Jharkhand will benefit from the meeting . . .
Posted by Jeevan at 8:52 PM