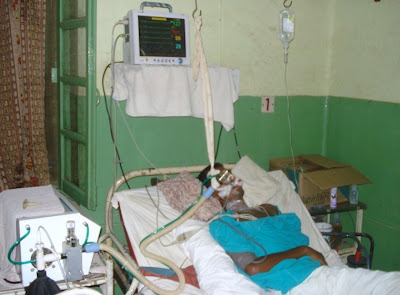 Something for which I was never prepared when I joined NJH in June 2010 was the amount of critical care work which I would end up doing.

Having a background in Community Medicine (Public Health), it was a challenge to get into using ventilators, managing pulmonary edema, rupture uteruses, cerebral malaria. More of a challenge since my last year in the Christian Medical College, Vellore was spent among the Jawadhi tribal community trying to convince them to come for antenatal check-ups, getting them to run small scale income generation programmes, conducting mobile health clinics etc.

From an healthcare institution point of view, NJH was quite peculiar.

Situated in the middle of a heavily forested area along a National Highway linking Ranchi with Gwalior, one would have expected hardly much of a crowd. Yeah, we do not get much of a crowd. The routine cases of malaria, enteric fever and normal deliveries are dealt by the motley crowd of quacks and dais in the villages.

So, if you come to our outpatient, you may think that there is not much work. But our repertoire of cases will put a Medical College to shame. You want to know, what we have in our 6 bedded Intensive Care Unit now. Here’s the list –

1.    A young man who’s survived a krait bite. He was in the ventilator for about a fortnight. Then he went into pulmonary edema. He’s slowly on his way to recovery.
2.    A young lady who went into pulmonary edema following eclampsia. She lost her baby. We had very little hope of salvaging her.
3.    A middle aged woman with organophosphorus poisoning. Again, we were not very sure of getting her alive. She had drunk too much of poison. She’s also slowly recovering.
4.    A little girl with partially treated meningitis. Still not very sure of what the outcome will be.
5.    A young man who’s just come in with a clinical diagnosis of cerebral malaria. For him to be admitted, we had to shift out a young lady who had a molar pregnancy. She had a hemoglobin of 2 gms%. By God’s grace, we could do an evacuation and she’s doing ok.
6.    An elderly lady with a very bad pneumonia. She has already been managed at Ranchi.

Then there are 3 more patients with severe malaria who are waiting in the General Ward. I would have wanted them also to be under close observation. In addition, there is a young lady with bad obstetric history (G6P5L1D4) having severe pre-eclampsia at 28 weeks who’s refused to go elsewhere.

I can only pray that there is no patient with rupture uterus or eclampsia coming in during the next 24 hours.

Well, what do I want to convey?

Critical care is something that we in mission hospitals need to look at very seriously. Traditionally known to be bastions of surgical care, there has been a major shift.

The major reason being that very few hospitals are interested in critical care and when there are facilities for critical care, it is too expensive for the common man.

So, along with palliative care, geriatric care, care of HIV AIDS etc . . . something very unusual is being expected from us in the form of critical care.

However, the ultimate question is about getting committed young men and women to serve alongside us.
Posted by Jeevan at 11:55 PM