It was one of those very cold winter mornings. I slipped into the Acute Care Unit to find the previous night's Cesarian section patients doing quite well. The babies, cute and rosy, being sung lullabies to. The mothers blissfully proud of having delivered baby boys in deep sleep.

However, it was not difficult to diagnose the richer one of the two patients.

The lady on one bed was an epitome of affluence. Mink blankets . . . a separate mattress for the baby . . . brass spittoon . . .  a mini lakme make-up set on the bed-side table . . . a servant girl to hold the baby when the family is tired . .  . The male relatives were quite flashy . . . Ray-Ban glasses, leather jackets, one guy with a Nokia Xperia .. .. .. As I went about with the morning routine, I found out one of the relatives getting into a Scorpio. Sweets were distributed . . .

The other patient was a classic example of our average patient. Cannot be called to be poor as a church-mouse. They had food . . . it was quite simple. Lentils, rice and roti . . . The clothes were not less than at least 3 years old . . . there was quite an evidence that the quilts they used had seen at least a decade. There was no servant to hold the baby . . . the grandmother of the baby could be seen dozing off with the baby in her arms . . .  the male relatives were daily wage laborers .. .. .. Cell phones . . . yes, cheap duplicates of flashy mobile phones . . .

Well, you may wonder why all this description . . .

Just because, the former patient had a RSBY Smart Card signifying that she came from a family in the Below Poverty Line category and the latter had none . . . I came to know of it later in the afternoon, when I found that the first lady was shifted to General Ward . . . she was not eligible for Private Ward if the patient needed RSBY benefit.

It's not very often that we find such rich patients with RSBY card, but it is not rare.

I'm fine with everybody having an RSBY card, but it pains when we find patients who cannot afford one square meal a day not being included in this welfare scheme.

Which brings us back to a cardinal question being asked all over the world . . . at whose expense have the rich become rich? One need not have much sense to come to a conclusion . . . Yes, the rich are rich at the expense of the poor . . . those who live in the shanties and slums in the metropolitan cities, just outside the walls of those gigantic factories spewing smoke and what-not, farmers in the villages growing food for us but having no share of the big profits made by middlemen . . .

And now . . . welfare schemes being kept so much away from the real poor and marginalised . . . only to be used by the middle class and to a certain extent by the upper class . . . 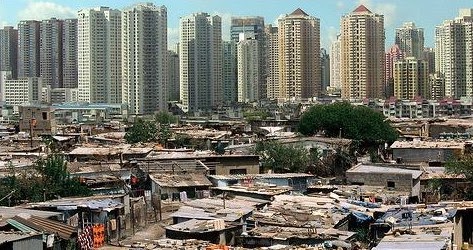