It was one of those chilly nights in 2004. Just around Puja time . . . I don't remember if it was before Puja or after. One of us on duty was called for a late night call . . . it was not yet midnight. We were just a group of 4 junior doctors in the hospital for that week. No one senior enough to give us solid guidance . . .

The patient in question was a young lady, 16 years old . . . with a history which could only be one diagnosis . . . an enteric perforation. With a history of fever of around 10 days followed by severe abdominal pain, vomiting and abdominal guarding, it was point blank . . .

Now, what were we supposed to do? Of course, refer . . . The person on duty called another of us . . . to try to convince the family to take the patient to Ranchi. It did not work . . . the next doctor was stirred up from his sleep . . . we still had no luck . .. ... the fourth one also came. The father was adamant - 'we've spent enough on her treatment. If you don't do anything, we're taking her home'.

We had to operate. Drs. Nandamani and Vikram were going to operate. . . One medical student who had come to visit, Atul also volunteered to assist. Johnson and myself were to be on floor . .. ... We decided to document so that if there is a medicolegal issue at a later stage, it could be of some help. Nobody really knew what to do or why we were doing it.

Nandamani suggested that we call up Dr. Bala, the surgeon who had recently left us after completing his service obligation. With few pearls of surgical knowledge transmitted over the telephone and some quick reading, we were ready to take the plunge. The surgery was uneventful .. .. ..

But, post-operatively the wound had become infested and we found out that we were in a soup. A fistula had developed. 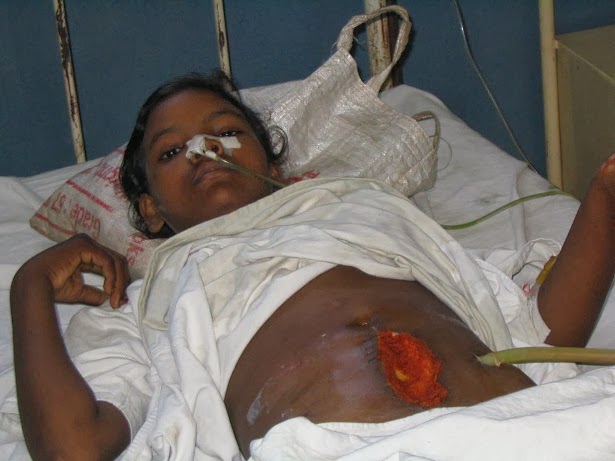 A long period of admission of about 2 months followed. Nandamani would only think about this patient for almost 2 months. You can very well see from his discharge summary on how relieved he was when she was ready to go home. There was so much of prayer which went into this girl. 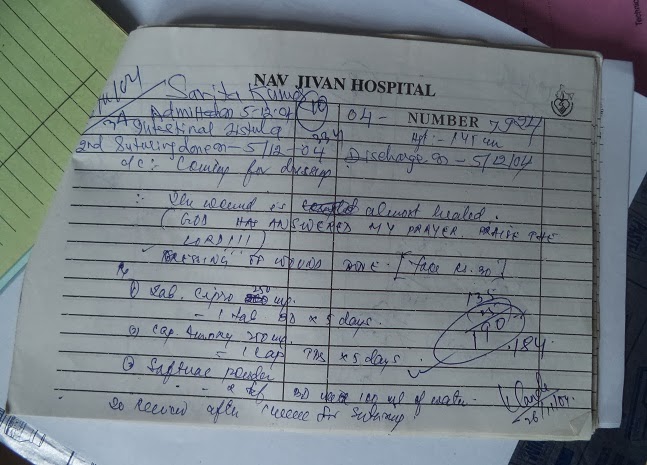 Whenever we talked about miracles we witnessed in 2003-04, we regularly used to remember this case.

Fast forward to 16th February, 2014 . . . One of our doctors was seeing a antenatal patient who had a very peculiar request. She wanted details of a surgery done about 10 years back. The concerned doctor came to me and told about the request. The patient was having her antenatal care at our sister hospital - Jiwan Jyothi Hospital, Robertsganj.

I could not believe my eyes when I looked at the outpatient card . . . the lady in front of me was the same Sarita Kumari on whom we had done the surgery 9 years back. Married about a year back, she was just into the second trimester of her pregnancy. I could only praise God that we novices were involved in saving the life of this lady 10 years back . . . whereas she would have died if her father took her home if we had refused to intervene.

We broke lot of rules 10 years back . . . quite a complicated surgery without any surgeon, anesthetist or any sort of consultant, two pints of blood by UDBT (Unbanked direct blood transfusion).

10 years later, I wonder if we would have taken up this lady for surgery. Times have changed with regard to medical practice. Really . . . for the poor . . . no . . . not much has changed.

The other day, when Dr. Nandamani was here, I told about 6 patients with acute abdomen who needed surgery and we did not take them up for surgery since he was away . . .

And when people venture to such difficult situations, we've always seen miracles in the lives of our patients as well as ours . . . and reasons to praise God when we become a blessing to countless lives and families . . .
Posted by Jeevan at 10:00 AM