First of all a warning to those who may not be used to seeing lot of blood and bad wounds.

Little NV (5 yrs) was playing outside his house on evening of the 25th of June, 2011 when he was bit by a spider on his right leg. The spider was a bit larger than the usual ones. His parents did not take take it much seriously - but the leg had turned into a funny colour by the next day morning and it was started to swell up and few blebs developed around the site of the bite. He was taken to the local quacks who gav 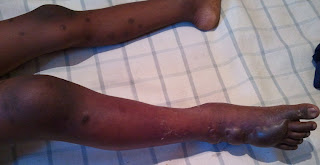 e him some injection and medicines. However, the leg continued to pain and swell.

NV was brought to NJH on the afternoon of 27th June. The snap of his leg is shown here. It looked toxic and the muscle compartments were very tight. We explained to the parents that the leg looks quite bad and we would need to do a fasciotomy to release the tension of the inflammed muscles. To make matters worse, there was evidence that one of the nerves of the leg was damaged. There was foot drop. His parents did not find the prospect of putting incisions over the already discolored and damaged leg, logical as part of the treatment.

m on antibiotics, put a splint for the foot drop and started regular Magsulf dressings on his leg. Unfortunately, the leg was becoming worser. The skin started turning into black. Now, the parents somehow gave consent to go ahead with a fasciotomy - however, we feared the worst. More worrying was the black colour of the skin.

We went ahead with the fasciotomy. The skin had by now become completely black. We decided to take off the black skin and plan skin grafting. We've done that in part of the leg - and is waiting with bated breath on the outcome. The only encouragement has been the healthy tissue beneath the ischaemic skin.

I'm sure that not many of such cases would have been seen. It looks more like a snake bite. Had it not been for the piece of leg of the traitor spider carefully kept safely by the parents, we would have definitely put the blame for the same on a snake bite. But, then, there was no systemic signs of any envenomation. However, it is quite difficult to comment on whether the spider bite alone could have resulted in so much damage. The parents had taken him to some local practitioner immediately after the bite. However, he had no systemic problems.

Kindly pray that NV would make a quick recovery - especially that his nerve damage is reversed. We also need the parents to remain patient about the recovery of their son. If they suddenly decide to take him away all our efforts will go to waste.
Posted by Jeevan at 10:16 AM