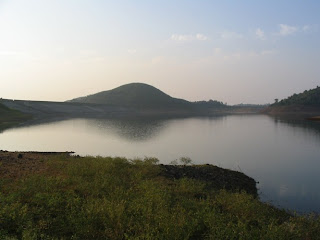 I thought that I had already written about this somewhere. I know I had lectured about this in couple of meetings.

Somebody recently asked me if I had written about it in my blog. I thought I had - but later found out that I hadn't.

We have a pretty dam near our hospital. It is quite a welcome relief to most of us as we go there to chill out after a week of hard work. Many of our staff have developed good skills in fishing on that dam. It is however recently that I discovered the sinister side of the dam.

This discovery came during the process of a needs assessment of our local community in health and development. One of the major problems that our region faces are frequent intervals of long standing drought. The last one was from 2009 to 2011. We would have been in really big trouble if we did not have rains during monsoons this year. There have been similiar situations before. There was one famous famine here in 1967 which quite a lot of people remember quite vividly as there was a lot of external assistance from abroad when people got to eat many alien foods. There have been anecdotal references of how people viewed biscuits from abroad with quite a lot of suspicion and would feed them to cattle before they themselves tried it.

Around the time a decision was made at the higher levels to construct a dam. As everywhere else, it was met with quite a lot of opposition. There was one person who was allegedly killed for leading the opposition to the construction. Nobody knows much about why the construction was opposed. However, the pro-dam lobby ultimately had its way. About 25 villages were submerged and they were relocated. All these villages were supposedly givent the right to earn their living from the dam. 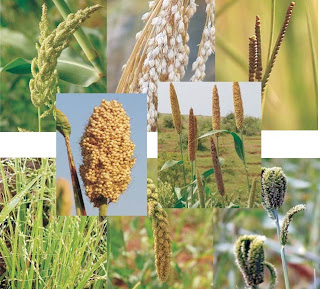 Now, the whole picture is how the people were adjusting to the droughts prior to the construction of the dam. The area used to be quite fertile though dry and the local population was very much used to cultivation and use of millets for food. Rice was one of the the many crops which were practiced. Along with rice, finger millet (ragi/madua), pearl millet (bajra/jowar), little millet (samai/sawai) and kodo millet were common cereals produced in the region. In addition, during good rains, vegetables very cultivated. The dry, arid, occasional rain fed area was very much favourable to a mixed pattern of farming.

The dam changed all of this. Rice was being purported as the miracle grain for the future. India was in the threshold of the Green Revolution. The major victim was the millets - many of us never thought that later we would be regreting about this. We have enough research at present which shows the superiority of millets in almost all facets of nutrition over rice and wheat. The damage which has been done is so much that a common weaning substance for infants, finger millets is hardly available in the region.

Now, we had been having discussions in the communities about reintroducing millets into their diet as well as cultivation. It was then that we realised how much the dam has damaged the ecosystem. The dam was supposed to have increased the rice production. Unfortunately, over time the local farmers realised the dam would not be able to supply them the altogether required amount of water. For the rice, they needed quite a lot of water. The droughts had been so fierce that releasing water from the dam has been a great challenge.

The paradox was that because the dam had come up, the soil had become too wet for any millet cultivation. Thus the idea of going back to millets did not find much takers. In addition, some form of prejudice towards millets as a poor man's food arose which further alienated the community from millet cultivation. Someone came up with the idea of vegetable cultivation - it was a good idea. But, the only problem was marketing. With the poor law and order situation and the frequent bandhs in the area - there were hardly any buyers. Still, quite a lot of villagers cultivate vegetables. The only problem being - last year, I remember occasions when okra (bhindi) was being sold at 75 paise per kg, tomatoes at 10 rupees for 5 kgs, garlic at Rs 30 per kg, radish at Rs 1 per kg and squash for 2 Rs for 5 pieces.

I'm very sure that this story is not unique to Tumbagara area. There have been many instances of environmental, ecological and behavioural revolutions due to similiar man made projects. Here, we see that the problems initially look very subtle, but over the years it assumes monstrous proportions that affect entire communities suffer without their own knowledge. 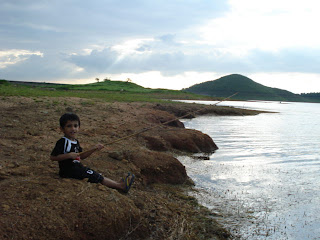 Meanwhile, all of us including my son, Shalom enjoy the quiet environs of the dam quite oblivious to the damages and changes that it has done to the communities which were displaced and even those live downstream.
Posted by Jeevan at 5:41 PM