The scenario which I'm going write now would be very unfamiliar to most of the people reading this blog. It is unfortunate that this has happened to MS in the 'Shining India' which boasts of nuclear armaments, satellite rockets, the cricket world cup, state of the art health facilities encouraging 'health tourism' etc.

59 year old MS was on his way back after procuring ornaments in bulk for his business when he fell down from the vehicle he was traveling in and had a lacerated injury of his right foot. He was taken to a local doctor by the driver of the tempo vehicle where the wound sutured up. The wound stretches all along the dorsum of his right foot and needed about 20 sutures.

10 days later, MS started feeling very funny - he had difficulty swallowing, which was slowly associated with an inability to open the mouth and a vague back pain. He was taken to the district hospital, where some antibiotics were prescribed. Unfortunately, he was getting worser.

MS landed in our OPD along with his relatives on the 4th of July - The diagnosis was easy, but difficult to imagine an adult having it in this era of high tech medicine - Teta 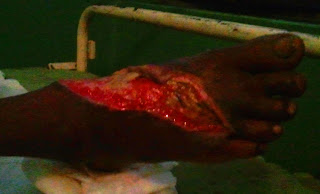 MS was put on a cocktail of diazepam and phenergan. In addition, as we found out that the wound had become badly infected - the sutures had to be removed, and we had to do a thorough debridement. We are thankful to God that he's made a good recovery from his tetanus. His wound is clean but has a long way to go to completely heal.

Meanwhile, I had a chat with one of his sons, who happens to know quite a lot about medicines - most probably a local practitioner in his village. He was aghast when he came to know that his father is suffering for want to one TT injection. I got hold of the prescription of the place where MS was taken first after the injury. 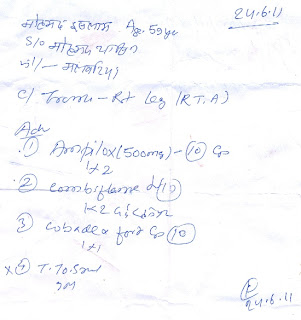 You can see very clearly that Inj TT was cut off. Most probably, it was out of stock in the place or they were asked to purchase it from outside and give it. A small lapse and the price that MJ and his family had to pay has been costly.

Inj. Tetanus Toxoid has been around for quite a long time - but it is sad that people still suffer for the lack of awareness about this. Years before, neonatal tetanus was quite common in this place - thankfully, the incidence has come down appreciably.

However, patients like MS teach that India has a long way to go when it comes to basic health care to the common man.
Posted by Jeevan at 9:25 PM