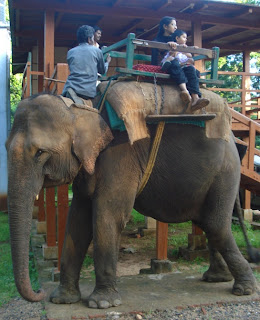 After a quite night at the 'Tree House' we were up early for the elephant ride. Unfortunately, the gentle beast, named 'Anarkali' was not at all in a good mood. To make matters worse, my son Shalom decided not to mount the elephant. Therefore, it was me, Angel and Charis who made the trip. The ride was quite a bumpy one and we did not see much of wildlife - only the tracks of elephants and bison. We had a fleeting glimpse of a pheasant and a large eagle.

Having finished our time at Betla, we had decided to drop in at the quack's joints on the way back. I had promised to give a detailed description of the visit.

To start with, the quack whom we shall call RNP, is in his late 20s. He had come to me about 3 weeks back requesting me to help him out if there are any complications in his clinic. I told him that what he was doing was quite dangerous. It was a bit difficult to believe him - but he claimed that he was doing hydrocelectomies, herniorrhaphies and appendicectomies under ketamine. It seems he had worked along with one of his relatives who was a surgeon in Ranchi and had picked up quite a lot of skills. He had got hold of a degree called BIMS - supposed to be Bachelor of Indian Medical Science.

I reached his clinic at around 12:00 pm today. There were two more people in his clinic whom he introduced as his compounders. On his table was a stethoscope, a quite old edition of Hutchinson and a microscope. He had prescription pads with his name printed on them with the degree BIMS in the end. I had wanted to get photographs of the place, but later decided against it as I felt that he could get suspicious about my intentions.

More important than the clinic was it's location. Situated between the towns of Daltonganj and Barwadih - the place was very strategically located. There were hardly regular vehicle services to the region. Even if someone got sick, the nearest place where there is a good hospital is Daltonganj which is Rs. 700 away by jeep. NJH is also Rs. 700 away from this place. Maybe that is the amount RNP would charge for a day's treatment of malaria with intravenous medicines.

There were three patients in the 'ward'. The first patient he introduced as a patient with fever whom he was giving intravenous quinine. The second was a lady on whom he had done an appendicectomy 3 days back and the third was a young man on whom he had done a surgery for hydrocele 4 days back. There must have been a total of about 10 people in the 'ward' - bystanders of the 3 patients.

On my way out from the ward, I asked him how much he charges. He charges according to the capacity. For the appendicectomy he had charged Rs. 3000 and for the hydrocelectomy Rs 2000. For the poor people in this remote area of Latehar, he was a life saver. He may have been a life taker too. However, isn't that true with us too - qualified medical professionals?

One of my acquintances who has known RNP for the last one year told me that there have been complications - but he is such a remote area the locals think that he does quite a big service to them that they do not make much of an issue with cases that go awry. I've seen the same happen with many other quacks too - where the patient readily accept any complication that happens, with the excuse that he is a quack rather than a qualified doctor.

I'm happy to made acquintances with a 'reputed quack'. He will be definitely keeping in touch with me for tiding over his complicated cases. I'm sure that I would be able to convince him to learn about the public health aspect of conditions which we find in such rural areas. Whatever said and done, people like RNP would find more favour in the eyes of the common poor man in remote areas of the country than fully qualified clinicians like me who is too busy, too far away and too much complex sounding for the rural poor.
Posted by Jeevan at 9:00 PM