LD had just finished bringing in light to every corner of the house as is the customary Hindu tradition sometime in the first week of June. The light source she used was a old tin filled with kerosene with a hole in its lid for a wick. Different places know it by different names – in quite large parts of the country it is known as ‘kuppi batti’ and is notorious for causing burn injuries. In fact during one of the conferences I attended on burns, I learnt that there is quite a large movement to abolish use of these ‘kuppi battis’ and it is not only prevalent in the Indian subcontinent but also in other South Asian countries as well as Africa and South America and is a leading cause of burn injuries in all these places.

LD must have been a bit careless. She kept the lamp on the floor and was just about to turn around when she realised that the free end of her sari had accidentally tipped over the lamp and the kerosene had drenched the tip of her sari. Within no time, her sari was on fire. LD does not remember quite well about what happened next. By the time, she came to her senses the only thing she knew was that the area below her waist has been fully burnt. Her husband later narrated that it was only because of the presence of mind of her nephew who cried out 'fire, fire' that she did not get fully burnt - quite a number of people nearby ran to her rescue and put off the fire.

But the damage was done. The family took LD to the district hospital where she was admitted for about 3 weeks. LD's husband noticed that nothing much was being done and she was not at all healing. Instead, the wounds had become a dirty yellowish in colour and was stinking. He knew he had to act fast. On his own will, he brought LD to a private practitioner in Daltonganj. He had a very interesting experience here. A junior person, an old acquintance of the family, presently working along with private practitioner warned him that the private practitioner is in fact not a qualified person and that he is more interested in extracting money from his patients. He advised the family to bring LD to NJH.

NJH has now been with us for almost 2 months. When she came, she was in quite a very sad state - with infected crusts all along the area of her burns - which extended from her waist downwards to include the perineum and the upper two thirds of both legs. As is always the case with mismanaged or neglected burns, the percentage of burns (about 25%) had increased because of the superadded infection. She has had quite a number of surgeries after admission. There have been ups and downs. Her skin grafts have taken up well. She's glad that she has ultimately come to us.

Unfortunately, to many of us at NJH, LD and her family looked well off. The family was initially paying off the bills. Then, we noticed that they were finding it difficult. We also did not insist that they pay. Suddenly, the husband came with quite a hefty amount and paid off quite a large part of her bill. Dr. Nandamani found out how this was done. LD's husband had sold off quite a good part of his agricultural land to rake up some money to at least pay some part of her bills. It was something unfortunate. 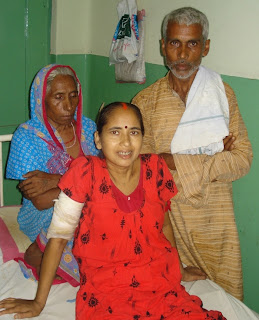 We have insisted that they do not pay anything more. However, the outstanding bills amount to something around Rs. 40,000. Similiar to MI (http://jeevankuruvilla.blogspot.com/2011/08/prodigal-son-attempt-to-come-back.html), we are looking at the option of well-wishers and good Samaritans pitching in to cover part of her treatment costs.

LD looks forward to getting back home to her village in far away Garhwa soon.
Posted by Jeevan at 10:35 PM