3 days before I started on my holiday, we had a pregnant lady at term who was bleeding from the morning come to us sometime in the evening . . .  and die couple of hours later. Dr Shishir who was on duty called me to report the maternal death. The history was appalling. The lady should never have died.

She had her routine antenatal care. Her hemoglobin done few weeks back showed 8 gm%. No ultrasounds were done. She was on oral iron. She had started to bleed in the morning. The relatives had taken her to the district hospital. She was there for quite a long time. The relatives were not sure what was done. Later they took her to a private hospital from where she was referred here.

We could not measure any blood pressure on her and there was no pulse. She was white like paper. Hemoglobin came as 5 gm%. I'm sure it must have been lesser. There were no relatives to give her blood. We tried our staff. Although, the blood group was a common one . . .there was nobody who was fit to give blood . . . couple of them were sick, others had given recently.

Her blood pressure or pulse never came . . . without blood, there was no option. She died . . . 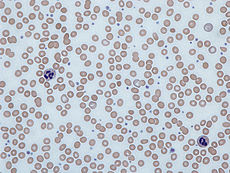 Talking about her hemoglobin of 8 gm%, it is not an uncommon thing at NJH. We routinely see hemoglobin values of 8 and even lesser. The reason I write is the recent discussions I had with few of my friends and an article I read today about the use of parenteral iron in situations such as ours.

If we keep the cut off of 11 gm% to diagnose anaemia in NJH, I'm sure we'll diagnose almost 100% of our pregnant women anaemic. Values of 9-10 is the highest you will find here. Almost all studies done at many places in India gives the prevalence of anaemia in pregnancy as something between 30% and 100%.

So, I was quite surprised when I read in the article mentioned above that the patient Ahmedbi whose hemoglobin was 9.8 gm% got a drip of Iron-Sucrose. Well, I can imagine the justification of the doctors who have started doing this in spite of not much evidence for such a practice.

Anybody who has taken the Iron tablets given by the government would vouch for how unpalatable it is. And to have it during pregnancy is something which many a pregnant lady would not really like. Over my clinical practice, it has been quite common to have patients confess that they have not taken their prescribed medicines and pregnant women not taking their Iron and Calcium form a major chunk.

And even when they take it, there are other issues involved. I've somehow come to believe in the theory of the chronic malnourished state. I remember someone talking about it . . . but can't remember who it was. The theory is that in many of the impoverished regions of the world, the chronic state of malnourishment results in the body being adapted to function with a below optimum level of nutritional states. Which ultimately results in a poor absorption even in a situation when there is adequate nutrition available.

Otherwise, I cannot explain how in NJH we see so many people from rural areas who would have been labelled terribly sick in a tertiary hospital elsewhere survive tough surgeries and major illnesses like malaria, enteric fever etc.

The chronic malnourished state continues even the lady becomes pregnant and no amount of iron and vitamin B12 pushed down the gut brings any change in the hemoglobin levels.

Well, I'm sure that this would need to be researched well before we can draw conclusions.

One more reason why I suspect a faulty absorption of nutrients in states of chronic malnutrition. We see quite a lot of patients with clinical features suggestive of Cyanocobalamine deficiency who do not respond to oral Vit B12 . . . but respond well to Vit B 12 Injection. I do not expect a high prevalence of Intrinsic Factor deficiency in the population . . .  Well, another explanation is the low IF values in people with chronic malnutrition states.

Whatever it is . . . one thing have I realised. The knowledge we have about something as simple as anaemia is quite limited . . . leave alone complex diseases like cancer . . .

The parting shot . .. ... Sometimes I wonder, in a country like India . . . even evidence and scientific explanations are sometimes of no use. It might surprise you . . . We do not have provision of free Iron and Folic Acid tablets for our Antenatal patients . . . This is when we have enough of evidence about how Iron and Folic Acid tablets could be the lifeline to Antenatal patients . . .

Preventing maternal deaths as the one mentioned in this post . . We do not have blood banks where there is round the clock availability of blood. And this holds true for the 4 million population in catchment population . . . Well, that is a post for another day . . .
Posted by Jeevan at 9:04 AM