I have been on vacation with family for the last 2 weeks. We travel quite a lot and we do enjoy it. Most of the time the journeys are done by train and for quite a long time, they would continue to be by train as the there is hardly any hope of airtravel costs coming down.

We were planning to return the next Friday. However, certain compulsions back at NJH needed us to reach back couple of days earlier. Which meant that we took a decision to take Tatkal tickets. 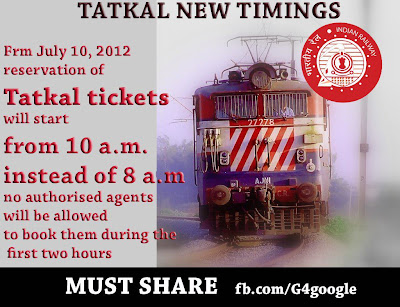 Well, I have heard of enough stories on how harrowing it could be. Booking on the IRCTC website was totally out of question. I expected it to be a tough 24 hours. And I was well prepared. However, the experience was hilarious.

The decision was taken a couple of days back. The reservations for the tatkal ticket opened at 10 AM on the day immediately preceding the day of travel.

I thought of doing some ground work on how the whole system worked 2 days before I was supposed to take the ticket. To my horror, I found out that the queue for taking the tatkal ticket started more than a day before the allotted time for starting the reservations. Considering the long queue I witnessed at Trivandrum Central Railway Station, the situation was much better at Chengannur Railway Station.

People came and lay on the floor outside the veranda of the reservation counter overnight. There was a sheet of paper on which people wrote their names. You''ll understand more when I show you few snaps.

I had to travel anyway.

I had to take my ticket on the 30th October at 10:00 am. With only 6 tickets available for grabs, I had only a small margin of error. I was there in the Railway Station at 2:00 pm on the 29th October. Thankfully, there was nobody else. I had taken a sheet of paper on which I wrote my name. I filled out one application form and laid it on the veranda with couple of stones on top.

I waited till around 5:00 pm, when another passenger turned up. The habit of reading helped me to pass my time fast. Soon, there were 2 more. I left my position and went home after telling the people after me that I would come back soon. I was back by 8 pm. There were a total of 6 people in the line. I was relieved that nobody tampered my position at the head of the line.

Soon, we had developed a sort of camaraderie. The rest of the group was shocked to know that I had come at 2 in the afternoon. There were couple of them who did not come with photocopies of the ID card. I helped them get the copies. They had become very indebted to me and requested me to go home and come back in the morning. I was not very inclined, but sleep was slowly beckoning me back home.

I returned home by around 10 pm. The plan was to go back again at midnight. . . . which ultimately never materialised. However, I woke up at 4 am and went there. There were some 10 people now in the queue. My new found friends told that everything is fine. I returned home.

I returned again at 6:30 am. There were about 20 people in the line now. At 7:40 am, the booking clerks arrived and gave us token numbers. Later, I returned for the last time at 10:00 am and got confirmed tickets for  my journey.

In spite of the fact that the Indian Railways has the largest rail network, the facilities available for reserving tickets are quite archaic. The internet portal is a nightmare. I hope with the recent change in guard, things will improve.
Posted by Jeevan at 10:09 PM