There was the amazing story of this husband who supposedly walked 40 kilometers through dense forests carrying his pregnant wife who appears to have had severe eclampsia.

My thoughts turn to quite a lot of our patients who are not that lucky.

We at NJH get quite a lot of such high risk obstetric patients who reach late. Not that we are the best centre to treat such patients. But, we are the most easily accessible and affordable to the communities around us.

The last month, I had been searching for the best story in Maternal and Child care that we had in the last financial year. And the below story is what I thought was the best. I had posted about this before.

However, the snaps tell a great story.

UD had been in labour since the last 24 hours. She had also received intramuscular injections at her house. She had gone to the district hospital as well as the private hospital in town. She reached NJH late evening yesterday. This was UD's first pregnancy.

The diagnosis – Face presentation with obstructed labour and septicemia. She was posted for emergency surgery. The uterus was stinking. It was a surprise that the baby was alive although severely asphyxiated and sick. 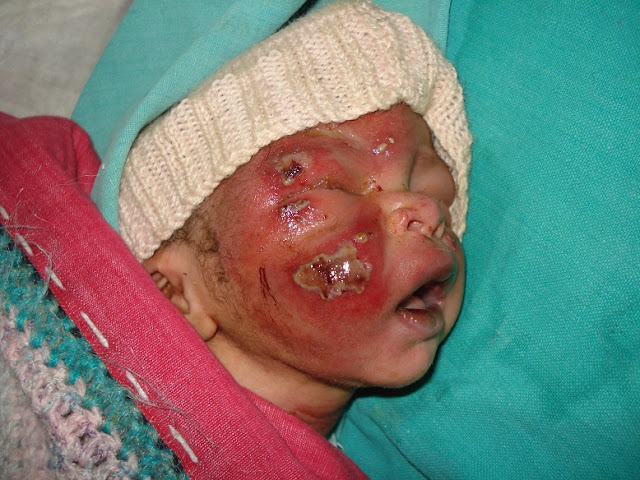 UD and her baby took about 3 weeks to recover.

We were quite blessed that we would get them both healthy. Recently, we had a lady who came in labour (LD) who had a very similar history. And we ended up with a maternal death and an early neonatal death.

Ayyappan's child did not make it. However, his wife, Sudha made it. Thanks to Ayyappan's heroics.

I wish we have more menfolk all over the country who would go to any extent to save their women folk.

Email ThisBlogThis!Share to TwitterShare to FacebookShare to Pinterest
Labels: face presentation, maternal near miss, story of the year