PNEUMATIC WAR HORSE - A TRIBUTE TO A SILENT CHAMPION

This piece of blog I write to salute a silent champion and life-saver to many, who completes 5 years of service in our hospital. Her speciality has been to save patients whose respiratory efforts fails following some disease - the most common cases happening following cobra or krait snake bite, organophosphorus poisoning, and eclampsia.
The reason we did not have her till 5 years back was that most of her clan members came at a very high cost. They used to cost something between 700,000-1,200,000 Indian Rupees. They still cost the same. Till her prototype was locally manufactured by an anesthetist. Of course, she would not claim to be able to do the many intricate functions her fellow clan members boast about. But, she could do the most important function which we needed - and that was to ensure that we pump in oxygenated air into the lungs of a sick patient unable to breath.
The cost was about 60,000 Indian Rupees. The design was very simple. I understood it out only recently. It comprises of a wiper engine (the ones we use in vehicles), collapsible corrugated rubber bag and some basic electronic circuits designed to control the extent of collapsability of the rubber bag by which determine the volume of air needed to pump into a patient's lungs. She was called the Newmon Ventilator. 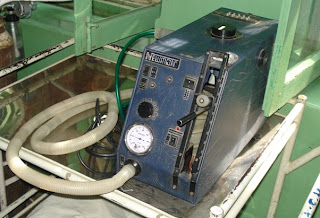 She has stood the ravages of time. Seen couple of surgeons, umpteen number of nursing staff and students, 3 Medical Superintendents and must have saved at least 300 patients. It was only recently that her recent boyfriend - our Engineer - told me that her collapsible bag usually does not last more than 3-4 years. We made the discovery about the bag only recently when she refused to respond to our manevoures and we had to open her up. We've tried contacting her original makers about replacing the collapsible bag, but had no response. In addition, she had her internal wiring bitten away at least couple of times by rats, which again was rectified only by our engineer.
Now, the hospital has become busier - we've realised that we need at least 2 more of her siblings. Since there was no response from her original makers, we scouted elsewhere. And we've found a company in Delhi who makes similiar machines and encouragingly with more functions. However, they cost extra - excluding freight and road tax, it is about 150,000 Indian Rupees. We were planning to buy two new machines - but with the increased cost, we can afford only one as of now, and that too because of kind financial help from churches in England through Dr Colin Binks. FRCS who served NJH from 1981 to 2009.
Neverthless, I salute our Newmon ventilator - who served us well for the last 5 years. With her new friend, the engineer, we have grand hopes of her serving us one more stinct of 5 years.
Posted by Jeevan at 8:36 PM