I had a quite busy time in Delhi. We got our ventilator - quite a compact instrument. Cost us 150,000 Indian Rupees. This has been helped through funds which had been facilitated through Dr Colin Binks, our former surgeon through a block contribution from churches in England - The St Francis’ Church, Westborough, Guildford, UK; The St Clare’s Church, Park Barn, Guildford, UK; Castle Square United Reformed Church, Treforest, UK and the St Mary’s Church, Ash Vale, UK. We are grateful for the kindness from the parishioners of all the four churches as well as to Dr. Binks who helped in raising awareness about our needs.

As we contemplated on what else to do in Delhi - there were quite a lot of hospital needs which came up. Having Dinesh along was a blessing. We scouted around for bedsheets first. With the increasing number of patients in the wards, we were running short of bedsheets. We were glad to find shops inside Delhi Cloth Market near the old Delhi station. Dinesh was surprised to find that the sheets we ultimately decided to buy came from his homestate of Tamil Nadu. We got about 160 metres of good cloth for about 8500 rupees. This would give us about 65 bed-sheets. From our previous experience in Ranchi and Kolkota, it was quite a profitable venture.

Then, we went to search for some surgical instruments that Dr. Nandamani wanted. Dr. Nandamani like all surgeons has developed special interest in some makes of the instruments. We use quite a lot of skin grafting blades. And Dr Nandu has taken particular liking for a Chinese make which we find quite difficult to get. We were glad to have got hold of 13 blades which 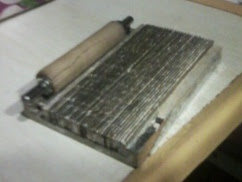 should last about 2 months. Then there was something called a 'mesher' which we could not get hold of. Nobody had any idea where to find this instrument - it's basically used to make a mesh of skin so that more surface area can be covered during skin grafting.

The grant from the churches in UK had also allowed us to purchase a Nycocard Reader II which would help us to estimate HbA1C, Urine microalbumin, CRP and D-Dimer. You may be wondering why a rural hospital like ours would need these tests. It was taken after quite a lot of discussions. Our diabetic crowd is on the rise and doing FBS/PPBS has become quite cumbersome and very difficult especially when patients find it difficult to reach the hosptial early in the morning. With the increasing number of deliveries and lots of babies born with high risk of sepsis, CRP would be of much use. HbA1C costs Rs. 1300 to be done in Daltonganj and CRP Rs. 600. So, we are going to give a tough competition to the rest of the crowd.

So, we had been scouting for this machine for quite a long time. The price which was quoted by our local supplier was quite high. It was by accident that we got into one of the shops to look at some Neubaur counting chamber cover slips which Angel wanted. They had quite a lot of laboratory materials. And it turned out that they were the major dealers for the Nycocard reader. The propreitor promised us a live demonstration the next day.
It was in the laboratory supply shop we heard on television about the drama which was unfolding in Central Delhi over Anna Hazare's arrest. The shop owner advised us to make a run to wherever we were put up. Our appointment with the ventilator supplier was at around 5 in the evening. As we rushed by Metro to Lajpat Nagar and then by auto to Ashram, my thoughts were on the struggle which Mr. Hazare was leading against corruption. I have written about my experiences with corruption -
http://jeevankuruvilla.blogspot.com/2011/08/experiences-with-corruption.html - which makes me quite dissillusioned about the possibility of eradicating corruption in India.

We reached their office by around 5 pm. Mr. 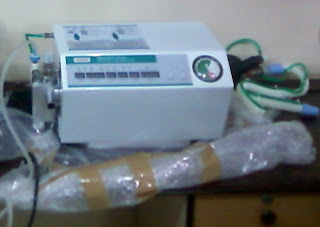 Rajput and his colleagues were kind enough to give a full demonstration of the machine. They also warned us to head back home as soon as possible. The machine was quite well packed and we lugged it to my uncle's place at Sai-udullah Jaib. As always, it was quite a time of unwinding for me and Dinesh at Josh uncle's place.
Early morning, we were at EHA central office. We were blessed to be part of the morning devotions. Dr Santosh shared about the feeding of the five thousand with five loaves and two fish. More on that in another blog. It was quite reassuring that we are remembered by so many people in their daily prayers. After some time of discussions in EHA office - Dinesh and me were off to the railway station. We were still not very sure about the aftermaths of Anna Hazare's detention. We did not want to take any chances.
Dinesh went straight to the New Delhi station along with the luggage and I went to see the Nycocard machine. Unfortunately, the technicians had brought a machine which was damaged. They had not noticed it. They apologised profusely and requested me about an hours time to come back with a new machine. I had about an hour to kill. I rushed back to Nehru Place and brought a 500 GB hard-disk and few books for Shalom and Charis. I was back at the lab shop by around 3 pm. They took about 30 minutes for the demonstration. I was glad to find that my HbA1C was around 5.
They finished by about 3:40 pm and I had 30 minutes to rush from Bhagirath Palace to New Delhi railway station to catch the Garib Rath. There were queues at the Chandni Chowk metro as well as in the New Delhi Railway station. As I entered the train, the train started moving.
Just wanted to acknowledge the Lord's grace in guiding us to the right places at the right time and getting quite a lot more things done than what was planned.