The end of last week, we were caught napping. And the cost was a terrible one. We had to refer 3 patients with eclampsia as we ran out of oxygen. We have 12 B-Type oxygen cylinders which we usually fill up once a week. Over the last 2 months, we had been filling them almost twice to thrice a week. 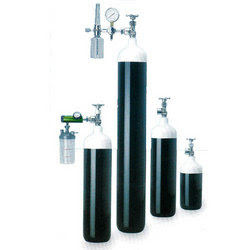 Ultimately, our support systems collapsed. The truck which usually delivers the oxygen had a break-down on the way from Patna and the factory that supplies us from Ranchi (which is our alternative) was closed down for about a week on account of a local festival. Perfect recipe for making us look like fools.

One of the 3 eclampsia patients was really poor. We had 3 oxygen cylinders. I was wondering about taking the risk and operating on her. Then we had 4 patients in the ward who were highly oxygen dependent. PD, the snake-bite patient, although off the ventilator needed oxygen to maintain saturation. There were couple of post-partum eclampsia patients who also needed oxygen. Then, a middle aged man with long standing duodenal perforation whom we operated couple of days back - who had been just weaned off ventilator.

It was risky to take one more patient who had a possibility of being dependent on oxygen for some time.

The poor family of the lady with eclampsia pleaded with us to somehow manage her at NJH. I consulted our Director. Managing such a sick patient without oxygen was unethical - - - they may not take her to Ranchi. After much pleadings, they relented. The family took her. I'm not sure where.

Well, we need facilities for more oxygen supply. To give you an idea of how much we had been using up oxygen at NJH of late . . . the following statistics would help . . . All B-Type Oxygen cylinders.

If this flow of patients continues, we would need to think of centralised oxygen supply.

We look forward for ideas from experts about this. I'm not too sure. There have been proposals coming in from couple of service providers for centralised oxygen supply and suction. The total cost is about 800,000 INR (15,000 USD/AUD/Euros or 1000 GBPs).

Another option would be to have oxygen concentrators. But, with the sort of electricity connections we have, it would be difficult to run and maintain.

Talking about oxygen, I think it would be out of place if I do not mention about the opportunity which we could offer to doctors and nurses who are interested in critical care. With eclampsias, rupture uteruses, cerebral malarias and complicated surgeries becoming more common, we would do better with a Internist or Anesthetist managing critical care rather than a Public Health guy . . .
Posted by Jeevan at 4:24 PM