Last Saturday, we started to fish from the pond. Along with the usual fish, we also had a fish locally called 'Tengra' 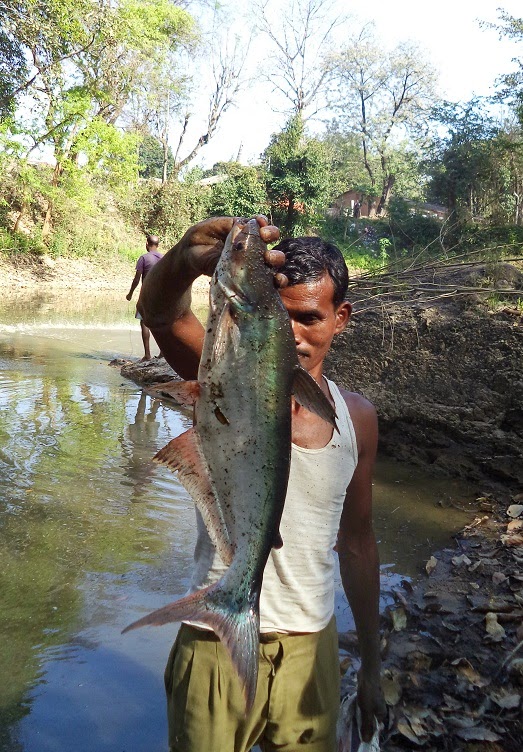 Now, none of us had expected the 'tengra' to be there in our catch, as we had not put 'Tengra' fingerlings. Now, there was a chance that someone had contaminated our pond with 'tengra'. Unless . . . what we knew scientifically as Pangasius was locally called 'tengra'.

'Tengra' was a cheap fish which was commonly seen in the local fish markets, but quite unpopular. Cheap it was, and quite a blessing for families like ours where the children loved fish. The reason - - 'It had only a single bone and no small bones'.

According to my staff, it was not as tasty as the 'rohu' or the umpteen number of carps, which according to me were all full of little bones.

So, I've sort of come to the conclusion that what is locally caleed the 'tengra' is actually Pangasius . . . to zero in further - - Pangasius bocourti.

If I'm sure that this is 'Pangasius bocourti', it means quite a lot for us as we had put the fingerlings sometime in the first half of July, 2013. It's not even 9 months and we got 2 of them weighing above 1500 gms. We did not give them any special feed as is recommended.

They say that this fish is quite strong and therefore is quite difficult to catch. Maybe we would be getting more of this fish in the next catch . . . which should happen in two week's time.
Posted by Jeevan at 1:57 PM