Few days back, one of my friends reminded me that I'm yet to post much about patient management at KCH. There have been quite a many . . . but I've been busy . . .

Today was a significant day for the hospital as we had more than a 200 outpatients (227 to be exact) for the first time in 2015.

Very similar to one of my first posts when I was at NJH . . . a small account of some critical patients. Though the volume is not yet up to NJH levels, I'm sure all five cases would interest you . . . 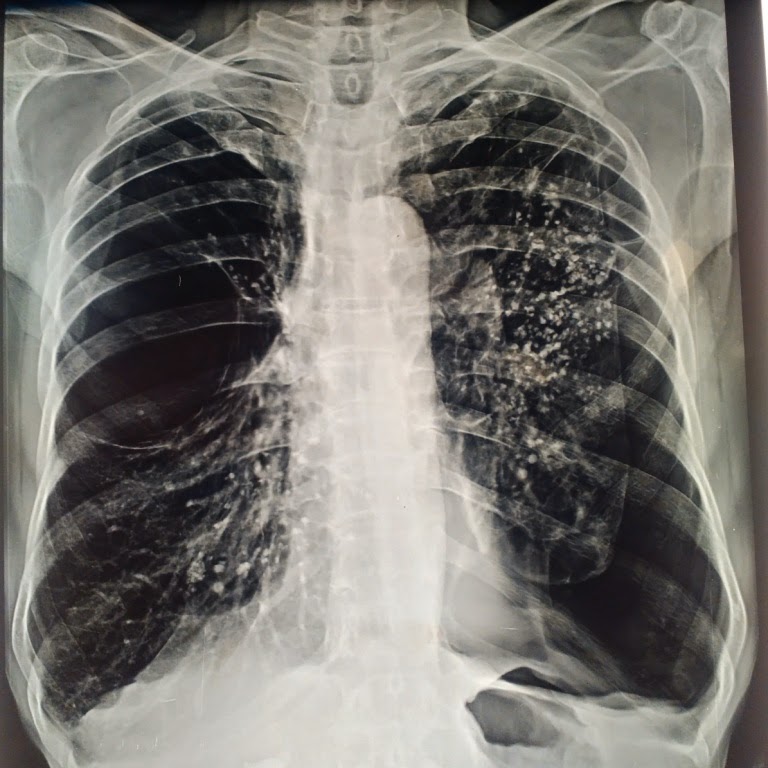 1. AAH, a 70 year old gentleman who had been with us since the last few days. Surprisingly, he had been going from hospital to hospital with a pneumothorax since the last 2 months. And after he came here, he was not allowing us to put a chest tube. The relatives initially told us that if we can give them a guarantee, we could insert a chest tube. I was not very confident considering that his pneumothorax was 2 months old. However, within 48 hours of his admission, he became quite sick that the relatives realised that it may be better to give us a chance. The procedure was uneventful and he is doing well.

2. BH, a 60 year old gentleman came in with history of fever and cough since the rains 10 days back. He attributed his illness to the wet weather. He was not very much willing to take our diagnosis of a miliary tuberculosis. In fact, he continues to be so sick that he needs regular oxygen.

3. CH, a 50 year old gentleman came to OPD today. He was in severe pain and was breathless. He had a X-Ray Chest taken 3 days back. There was a effusion. An aspiration showed empyema. The interesting aspect - he wanted to take a second opinion with some doctor he knew before starting treatment here. He promised to return tomorrow.

4. DDH - a 35 year old young man was brought in a confused state, gasping and frothing from the mouth. He had tried to commit suicide by hanging. The relatives had cut down the rope and brought him. He appears to have some amount of brain hypoxia. We've tried our best to refer him for elective ventilation. They are too poor to even afford the vehicle to Varanasi. I wish we had a better ventilator. He's till in the ward. He's a bit better, but, I'm sure that a ventilator would have done him a lot of good.

5. SH - a 80 year old elderly lady was brought with breathlessness since 2 months. Since 2 days, she developed severe left sided chest pain. An ultrasound showed cholelithiasis as well as a massive pericardial effusion. I wonder how she's still alive. The relatives were given the option of taking her to a higher centre for pericardiocentesis. They've left after quite a long discussion on further course of action. I've a feeling that most probably, she would be brought back to us in a couple of days.

Well, 227 with 3 doctors (one Junior doctor, one Clinical Pathologist and one Community Health Physician) and one nurse practitioner is no small work. I wish we had more experienced hands to help out.

And of course, some more equipment in the ward . . . the immediate need - couple of more multipara monitors and couple of ventilators . . .