Well, I had to somehow put in this post as there was quite a lot happening at NJH when I was away . . .

How do I start . . . It's 2 days since I arrived . . . It seems we had 3 maternal deaths . . .all brought quite late after labor had started . . . I'm yet to go into the details. But on preliminary investigations - all of them had been cases of eclampsia. As I write this, I've one more lady in Acute Care on the ventilator. . . Humanly speaking, there is not much of a hope. . . She is into a HELLP syndrome . . . We had requested the relatives for platelets for which they've gone to Ranchi . . . and it's General Strike all over the country today. . .

It has been quite hot here at NJH . . .Local newspapers have reported temperatures as high as 50 degree celsius (122 degree F) in some parts of the district. . . I wished I had stayed on in Kerala. Well, I've hope. The weathermen have predicted rains by June 10. We earnestly pray that it would happen. And there has been another major development - we've had electricity somewhat more regularly since today . . .So, a bit of a relief after one of our generators had crashed unexpectedly. We still are on the lookout for someone to help with funds towards a new 100 KV generator.

Today being Thursday, I was trying to get some amount of sleep when our chowkidar came knocking. Titus had sent me a chart. The patient's relatives could not pay the total bill. . . Well - the diagnosis. Obstructed labour caused by hydrocephalus resulting in a rupture uterus and a rupture bladder. The bladder rupture was too bad that Nandamani had to put in an patch of omentum to give some sort of structural integrity to the bladder. . .

Armed with my camera, I was off to the hospital with the hope of getting a good snap for a 'Human Interest Story'. You know, funders always like those - a smiling lady, happy to be alive and to be photographed for probably the first time in her life. And then the story of how their funds helped to give this lady life . . . quite good publicity material for a power point presentation on what all we do at NJH . . .

Before I went to the patient, I met the husband and brother of the lady. Wearing torn clothes, both of them appeared not to have decent food in the recent times . . . The husband looked forlorn. I was dressed casually. So, he did not recognise me as a doctor. I explained to him that the treatment had been quite expensive. The ventilator, the anesthesia, the monitors, the surgery, the prolonged admission, 5 pints of blood, antibiotics etc etc all resulting in a total bill of about 28,000 INR. He had paid about 11,000 INR so far. He had only 8000 INR more. . . I did not want to haggle the family any more. . .

I thought of seeing this lady, whom we shall call RD. She was so young. She did not look the 30 years. If she had changed into a salwar kurta and put some make-up, she could any day be mistaken for a 12th standard student. I shelved my plans to take a snap of her. For her age, her faced looked so much in pain and distress.

One can only imagine. Married for 6 years. Her husband had no land to cultivate in. He was dependent on the other landed farmers for labour. In addition, he went as migrant labour to distant lands. There was nothing much to eat at home. Worse was her obstetric history. The present pregnancy was her third pregnancy. Both the previous deliveries were home deliveries. The first one, a boy of about 5 years was alive. Really, she did not know how old he was. Her second pregnancy - the baby died after 3 days. And the third pregnancy was a real tragedy . . .

I pondered over all the possibilities. . . The family was obviously poor. How did they managed to pay our bill. Maybe they sold off some land . . . but, they did not have land. Or they must have got into some sort of bonded labour . . .quite a big possibility. I asked the husband . . . He has pledged some of his mother's gold and some brass utensils . . . Well, I do not know. But, the fact remains that the family has become poorer.

We do not have a choice. There were expenses involved and they were not small . . . 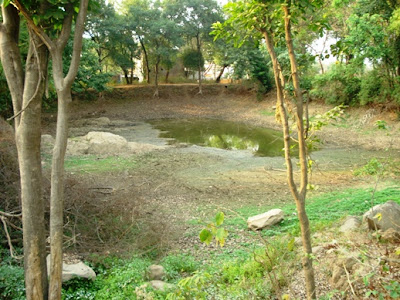 RD had come quite a long way and like most of our stories of maternal near misses and maternal deaths, she had been kept at other centres. She has been lucky to escape death . . . The dried up pond sort of reminded me of the life she was going back into. . . The family would have to up all those from whom they had taken loans to pay for her treatment . . . I wondered if she would even have a decent dinner tonight.

With quite a confused heart, I reached back home. . . I sometimes wonder what could bring committed people to this place where basic healthcare is lacking. Do remember, I'm not speaking about a village or a block . . .I'm talking of entire districts, regions . . .

To come back to an empty house is a terrible experience. I hope that this month will go fast soon. Usually, when I come back, I come back to a loud chorus of welcome from Charis and Shalom . . . and Angel who would be patiently asking about all that happened. . . Many a day, I would be too tired to talk much . . . 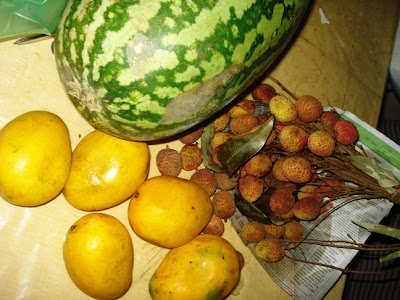