Below, is a clip of a news item published in our vernacular daily last week. 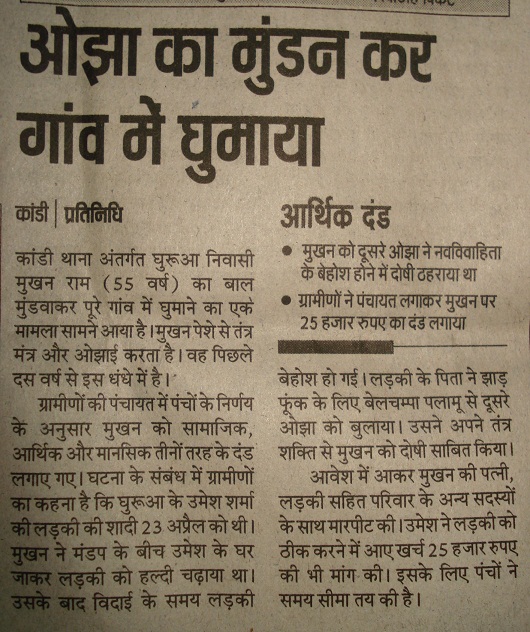 The translation is as follows -

It has been reported that a certain Mr. Mukhan Ram (55 years), a resident of Dharuwa village under Kanti Police Station was paraded in the village after having his hair tonsured. Mr. Mukhan Ram is a witch doctor by profession since the last 10 years.

The Panchayat had decided that Mr Mukhan should be punished in social, economic and psychological terms. In relation to the incident, villagers reported that the wedding of the daughter of a certain Umesh Ram took place on 23rd April. Mr. Mukhan had done a certain ritual during the wedding. After the ceremony, when the girl was leaving her house to her husband’s place, she had become unconscious. The girl’s father, Mr. Umesh Ram brought a new witch doctor for further ceremonies from Belchampa, Palamu. The new witch doctor proved by his magic powers that Mr. Mukhan Ram was responsible for the girl becoming unconscious after the wedding ceremony.

Mr. Mukhan Ram’s wife got into a fight with the family of the girl after hearing this. Mr. Umesh has demanded that Mr. Mukhan Ram pay up 25,000 INR which he had to spend towards getting his daughter alright after she had swooned during after the wedding ceremony. The Panchayat has given a time frame to Mr. Mukhan to pay up this amount.

1. First and foremost – the newspaper deciding to put this into print.

2. Second – to note that we continue to incidents like these in our country. Most probably, the girl would have too tired and probably hypoglycemic after the ‘long Indian wedding’ – and that was enough for a witch doctor to extract 25,000 INR from the family towards healing her . . .

My countrymen, we can only weep for our fellow brothers and sisters who are caught up in this mire of ignorance and sorcery . . .
Posted by Jeevan at 6:08 PM