1. The first two snaps of this photo post are hilarious. As you can see, this is a Barium meal follow-through film taken of a patient with an episode of acute abdominal pain. And the radiologist has diagnosed appendicitis from the investigation. Well, if somebody could tell me if this is part of the investigation for an acute abdomen . . . I just can't believe that this guy has diagnosed a 'tender appendix' by ultrasound. . . 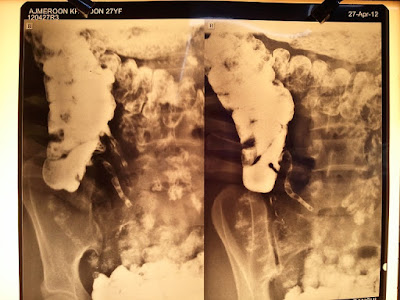 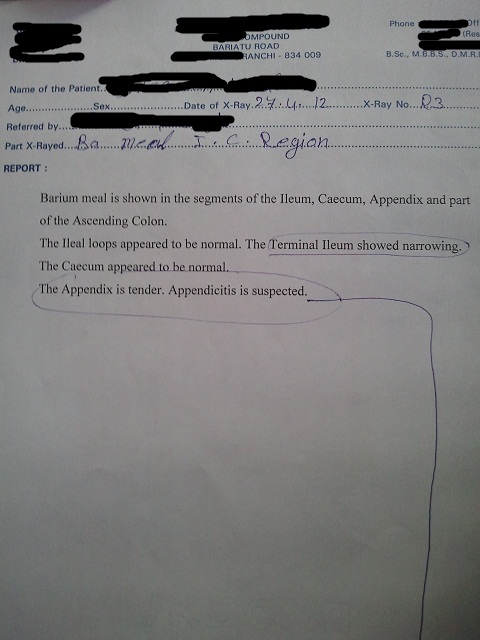 2. Few snaps of a common scene when you travel between Kuru and Ranchi especially in the morning. The region around Kuru is quite favorable for vegetable cultivation.

It is only quite recently I found out that the local farmers cultivate seperately for local consumption and commerce. For local marketting and consumption, they use the traditional seeds without much of pesticides and fertilizers. For those being grown commercially, they go all out with all the latest technology - high yielding varieties, pesticides, fertilizers, growth hormones . . . One farmer even told me about injections being given to cauliflowers and cabbages to increase their size and give a fresh look . . .

I asked few of the locals on why they did not prefer the newer varieties - all of them had the same answer - 'They don't taste that good'. Well, those of you in cities getting fresh looking and large sized vegetales . . . be careful . . . I'm sure you won't be able to wash off injected chemicals with all the soaking and scrubbing . . . 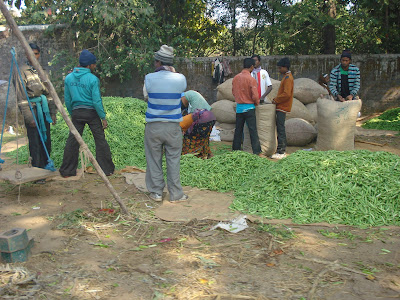 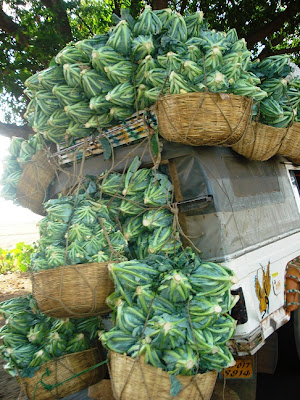 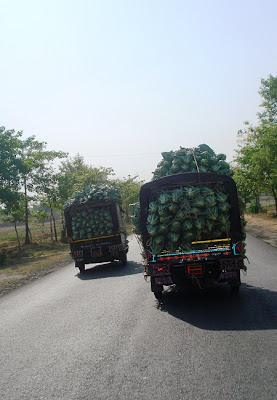 3. This is the per-operative picture of Mrs. AD's uterus after we had put a B-Lynch suture to make the uterus contract. Well, it is sort of a modified B-Lynch suture . . . as the uterus was of a funny shape and the traditional one did not hold well.

AD had been through regular antenatal care in one of the private hospitals in the district headquarters.

She had gone into labor and had been admitted since morning in the same hospital where she did her antenatal care. Over the day, her blood pressures rose and she was referred. Dr Titus was on duty and I was called. She was in severe pre-eclampsia and the baby was in an occipitoposterior position and there was hardly any pelvic space - obstructed labour.

The problem was that the family was quite well off. . . Severe pre-eclampsia with obstructed labour . . . Recipe for real trouble . . . I explained to the relatives my predicament . . . To complicate matters, came her hemoglobin report - 7.9 gms%. Since she had come from outside, I had done the counts too - Total count was 28,000 with 90% neutrophils . . .

With all the required consents, I opened . . . The uterus was in a terrible state. From the outside itself, it appeared quite unhealthy. On opening, it was obvious - chorioamnionitis at its' worst.

The uterus just refused to contract. There were 2 pints of blood readily available at hand. It gave me time to start off with the B-Lynch and ask help from Nandamani too.So far, she has done fine . . . till I left on vacation. . .I was glad that she made it - otherwise we would have had the second maternal death of the month . . . 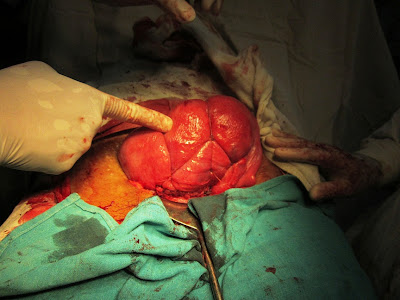 4. A scene from one of the Primary Health Centres we visited on our Tuberculosis Unit supervisory visit. The snap shows bundles of 'Bal Swasthya Card' (Student Health Card). Distributed from the government, the staff were not sure on how to go about with these documents. A well thought out program on paper, it's a waste when it comes to implementation at the grass root level.

These cards are supposed to be filled up for each student to be used as a tool to monitor their health over the entire year. 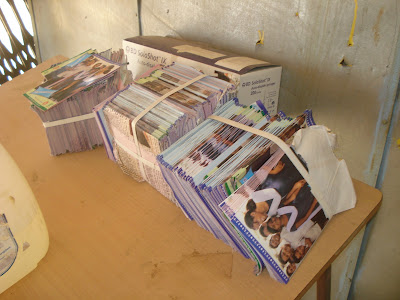 5. Railway line construction going on between Lohardaga and Tori which is expected to make it easier for us to connect to Ranchi by rail. 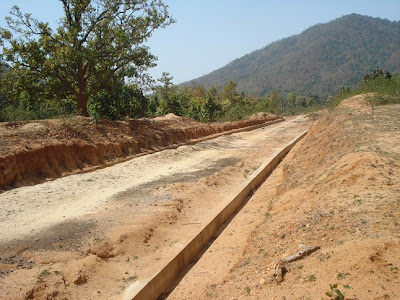