Some time back I had put in a terrible snap of a blood bag which relatives of one of our patients had brought from our nearest district headquarters. 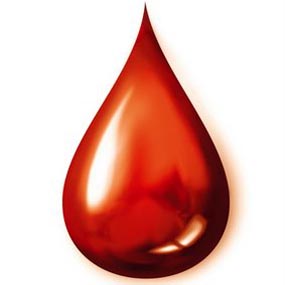 Yesterday, we had 2 patients who had come in with hemoglobin values of around 5 gm%.
The first patient, RK was the mother of 4 children and she was pregnant at 7 months gestation. She was from quite far away. She had suddenly started to bleed early morning. By the time she reached here sometime late afternoon, she was quite pale with no fetal heartbeat audible. Her hemoglobin was around 5.8 gm%. I informed the relatives that we could not do much without at least a couple of pints of blood.
That was when the husband informed us that the unavailability of blood in the district headquarters was the reason for her being referred to NJH. In fact, the relatives wanted to know if they could take the patient to Ranchi. I was relieved - but later realized that she was continuing to bleed and the vitals were going down. But, without blood I did not have any choice.
In the available circumstances, doing the 135 kilometer journey through bad roads was the best choice that RK and her family had. RK's relatives were well off and it was not quite difficult for them to take a decision to move ahead. I ensured that RK had two lines going in with intravenous fluids.
As soon as RK left, came the next one. SD, another multiparous lady with bleeding since early morning. Contrary to RK, SD's family was very poor. It had taken them quite a long time to arrange transport and other arrangements to make it to NJH. SD had another episode of bleeding earlier last month. However, it had subsided within few minutes. I told the family of my predicament of not having blood readily available.
The family expressed their inability to go any further. The husband told me, 'Sir, please do what you can. Even if the baby dies, please save the mother.' The blood results came. Hemoglobin of 5.3 gm% and the blood group was not matching with that of any of the relatives. It was quite late into the night and the relatives informed me that they would go to arrange blood as soon as it is daylight. I told them that it is a very risky plan. If she bleeds, we've had it.
Meanwhile, we did an ultrasound. It was a low lying posterior placenta with abruption. The baby was alive. I could only pray that she would not bleed. Soon, she was into her labour pains. I was surprised that she did not have any bleeding. Within couple of hours, the baby was on the way. She delivered a dead baby. Thankfully, she did not bleed much.
Blood transfusion facilities are a premium in almost all parts of rural areas of third world countries. In emergency cases, we keep few blood bags where we directly bleed for donation. It is illegal - but we do it so that lives can be saved.
The present policies of blood donation are quite archaic and it becomes quite difficult in difficult areas such as ours. And since the last few days, we had run out of blood bags . . .  We are yet to get them . . . We could have managed RK if we had at least couple of blood bags, if not given her a better chance of surviving the journey to Ranchi . . .