Just wanted to post couple of photographs and couple of thoughts related to a Near Maternal Miss we had today morning. . .
As you are all aware, obstructed labor is one of the major causes of maternal mortality. If I'm not mistaken, obstructed labor is either the fourth or the fifth most common cause of maternal mortality. Of course, the most dangerous presentation of obstruction is a rupture uterus.
I would be sinning if I do not admit the fact, it was couple of eclampsia patients and one rupture uterus which actually started this blog moving. . .
Many of the babies in an badly obstructed labor do not make it. And we had a very bad one today morning. The only thing we had in our favor was that the uterus was still intact and the baby was alive.
SD was in labor since yesterday evening. She started her pains at sometime around 6 pm in the evening. And from 8 pm, she was in the district hospital. She was started on a drip with some medicine - the family was not sure on what it was. . .  All through the night, she was contracting . . . Unfortunately, nobody did a pervaginal examination on her till today morning, sometime around 6:30 am, and she was asked to come to NJH. . .
I'm impressed. We've had terrible cases where patients were kept in the lurch in healthcare institutions, both public and private. Here, SD was referred within 10 hours of her admission although she could have been monitored a bit more better as well as had antenatal check up.
Well, that is the reason, she did not end up with a rupture uterus.
I was in the middle of a Cesarian section at around mid-morning when the news about SD's reaching NJH reached my ears. Dr Johnson saw her first and immediately posted her for Cesarian. . . The baby was wedged tight in her pelvic outlet. . .  He was worried if I'll have difficulty getting the baby pulled out from the abdomen . . .
And, oh my! It was the worst obstructed labor that I had ever seen. . . The uterus looked quite funny from the outside - was suggestive of bladder edema and dilated bowel loops. I decided to open the abdomen through a midline vertical and oh boy! Was I not overjoyed? The snap below tells the story . . .
The finger is on the upper part of the incision and shows the bladder. The second snap shows the place I put the stay suture before I opened the uterus. . .In my career of 10 years, that was the highest stay suture I've ever put . . . . 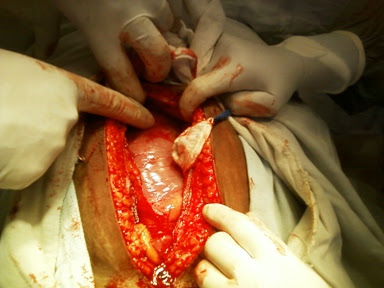 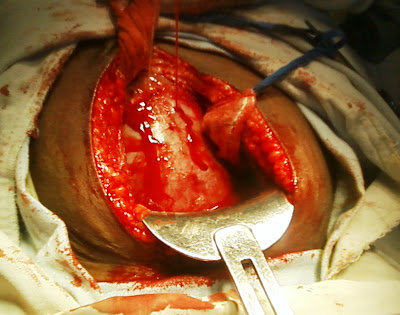 Of course, the baby was sick . . . However, my colleagues including the new kid on the block, Dr Titus ensured that the baby was breathing well . . . It was then that we noticed that the baby had a head little larger than usual. . . A head circumference of 40 cms for a 3.5 kilogram baby is definitely on the higher side. . . We've given an option to the relatives to take the baby to Ranchi for evaluation . . . Surprisingly, there is no caput or cephalhematoma . . . 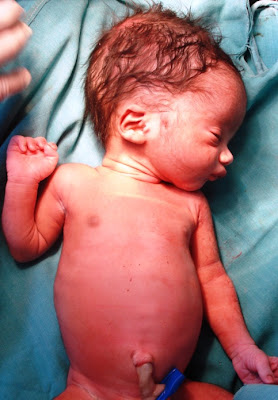 One more aspect about the whole incident was the time taken by the patient to reach NJH from the place where she was being managed earlier. . . A decision was taken to refer her to a higher center was taken at around 6:30 am . . . however, she reached us only by 9:30. The place she came from is only 30 kms away . . . Inadequate transport facilities, bad roads etc contribute. . .
We got the baby out at 11:12 am . . . We could have done it faster had the theater been free. . . When the patient arrived, another Cesarian was on and I was sure that the Cesarian on SD be done on General Anesthesia. And I was thankful to the Lord that we did it on GA as the surgery took more time than normal as well we needed more muscle relaxation . . .
We still need to go a long way . . . And the most easiest aspect of this journey is that the interventions, such as protocols, identification of danger signs etc that we need to implement are simple and inexpensive . . .
Posted by Jeevan at 6:12 PM