I had been mentioning about the Rashtriya Swasthya Bima Yojana (RSBY) in few of my earlier posts. Emmanuel Hospital Association, which is the parent body of our hospital, along with the UNDP has been running a programme aimed at strengthening the RSBY since the last year (from October 2010) and couple of days back, we had a meeting aimed at putting in the experiences in the field. 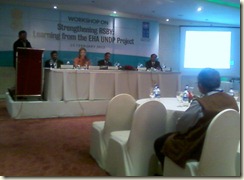 It was an amazing time of learning and sharing.


It was a bit unfortunate that I had to leave sometime in the afternoon. And well, that was an embarrassing story, which I could narrate sometime later.

Health care costs, as is everywhere else in the world is a major concern for policy makers.


There are enough research papers which tell us about how families are either dragged or kept in poverty due to health care costs.

Now, I understand that quite a lot of organisations including few of our sister units have been trying for quite a long time to put in systems in place whereby poor patients would be benefitted by some sort of an insurance scheme, so as to prevent huge healthcare expenses hampering the financial stability of a family.

The RSBY has been a brilliant idea and it is already working wonders in many a poor families all around the country. We were quite blessed to have Mr. Anil Swarup, the prime architect of the program in our learning seminar at Delhi and it was a double blessing for me to be part of the meeting he had at Ranchi the very next day for discussions with the Jharkhand team.

Now, what we have been doing is to do a project aimed at strengthening RSBY. And that too at a time when we were not empanelled for treatment under the scheme. However, we tried quite a lot of things to convey the message to the people.

1. The root of quite a major crisis is the BPL (Below Poverty Line) list. I’m told the list which was followed by Insurance Company during the enrolment periods was outdated. Now, for people who do not have a BPL card, they have a APL (Above Poverty Line) Card. Now, what we found out was that many of the APL card holders had the smart card and those who are supposed to have BPL card have been left out of the scheme. The best solution for this would be to enrol everybody in the scheme with those who have a regular income or land having to pay the total premium in comparison to the poor families for whom the government would pay the premium. Well, I agree it’s not going to be all that easy. But, there are states who are doing it.

3. There was a delay in providing the smart card. Many a time, this was because of poor infrastructure especially availability of electricity.

4. There was an allegation of insurance company avoiding the empanelment of certain hospitals and even when empanelment was done, there was a delay in providing the necessary equipment to operationalize the program.

5. There are lot of mistakes in card in the name, age, and sex which is found in the card. Now, I cannot blame anyone. In our registration department, I’ve seen the following versions for a same name within a single inpatient chart before the arrival of computerised records – shobana, sobana, shovana, shobna, sobna. Coupled along with this is multiple aliases that an individual keeps.

6. There are quite a lot of people who have been enrolled who have no clue on what the card is used for. Some people had the perception that this smart card is some sort of an ATM Card or Identity Card.

7. There have been reports that few hospitals included under RSBY scheme did not provide RSBY facility in proper way.

Well, as soon as I reached back to NJH, the insurance and software provider was behind me to get the software installed into our system.

And ultimately, we ended up doing it today – Sunday afternoon.

Many a time, I’ve been trying to convince many of my colleagues and acquaintances about the poor state of communications in our area. Unfortunately, I found it quite difficult to convince couple of government officials during one of the meetings at Ranchi about the difficulties we faced with communications and electricity.

And, today afternoon I had the district program manager for RSBY and staff from the software company arriving at the hospital to set up the software in our machines. To start with, we did not have internet communications. But, we were quite a determined lot. And the following snaps would tell you the story. 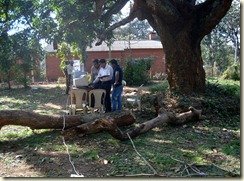 Yes, we actually carried the desktop to the best place we can so as to get a internet connection using a dongle. Why not a laptop? It is not supposed to be used for RSBY as the chances of cheating is much higher. And we could install the program in only one computer.

Well, after all the effort we could not fully register the program. It would take one more day. And the Lord willing, we would be part of the famed program within couple of days.
For us, it has been a journey of faith. We are quite unsure of how the whole exercise would turn out. We pray that the objective for which the RSBY has been set up will be met and we would be able to be more effective in catering to the poor and the underprivileged in the society. . .
Posted by Jeevan at 1:20 AM