We manage quite a lot of snake bites and the cases that we've been handling have been quite a lot compared to the previous years. Unfortunately, most of our snake bite cases reach us quite late.

I look forward to answers from experts about our observations with regard to snake bites who come late for treatment.

When patients come late, more than 6 hours after the bite, we've seen that the chance of having a anaphylaxis reaction to the Anti Snake Venom (ASV) is quite high. In fact, we've got this experience of patients bitten by krait (which is more common here) go into respiratory arrest as soon as the ASV is given.  However, I do agree that when we give it within the first 4-6 hours after the bite, we do not have to face this problem.

Is there any evidence regarding the time interval after the snake bite upto which ASV can be given - when all features of envenomation has set in? By the way, I've heard of hospitals using upto 200 vials of ASV to treat viper bite when the clotting time was abnormal after more than 24 hours of the bite.

As of now, I've 3 patients with krait bite who came about more than 6 hours after the bite. The first person came after about 9 hours of the bite. He was given ASV elsewhere (5 vials). I did not give him any more ASV and he is doing well now. There was another lady who had come in almost 12 hours after the bite. We did not give her any ASV in the beginning. However, one of our doctors thought the next day (almost 24 hours after the bite) that it did not look good. He started off ASV. The next thing I know was that she went into a respiratory arrest. She was in the ventilator for 2 days following which she has recovered.

The third patient came just about 4 hours back (4 pm) following a bite sometime early morning. He was maintaining the saturation quite well. I was not sure about starting ASV. However, I thought of starting it later. Within an hour of starting ASV, he had gone into respiratory arrest (almost more than 12 hours after the bite). He is on the ventilator now.

We also get late presentations of viper bites.

Below is the gangrenous leg of a boy who was bitten by a viper. He presented to us more than a day after the bite. He did not get ASV as his Clotting Time was normal. However, we had to do extensive surgery on the leg including skin graft. 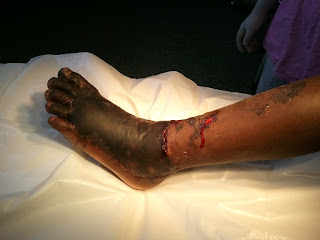 So, the ultimate questions being  -

'Is there a higher chance of anaphylaxis on giving ASV to patients who present late after a snake bite?'

'Is there a time limit beyond which ASV would not be of any use for a patient with systemic signs (hematotoxic/neurotoxic) of envenomation?'
Posted by Jeevan at 11:08 PM