Beaten Black and Blue into Shock

Yesterday night, we had a very difficult patient.
AS was on his way back from work to his village, when he was waylaid by a gang of thugs and beaten up. The excuse for the gang beating him was that he refused to give a lift to one of them in his bike after they had flagged him down.
I know many of you may be wondering why I’ve put in this post. The basic problem is that AS came in a shock with no pulse or blood pressure measurable. But he was conscious and could narrate what had happened.
We searched high and low for a possible cause for the shock. The only thing we could find was a hematoma of about 200 ml in his left hemithorax. Other than that, there were only bruises all over the back extending from almost to the neck to the buttocks. 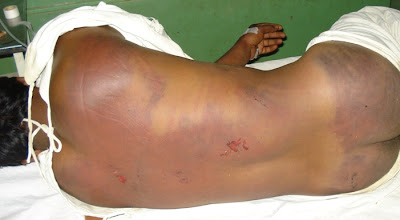 He had recovered with intravenous fluids but he continues to go into shock. We are still at a loss to find out the cause of the shock.
We have already offered to refer him to Ranchi for which the relatives have not been very forthcoming.
Today morning, we have re-examined him and come to the conclusion that he has multiple hematomas in the subcutaneous and intermuscular planes of the back of his body. In addition, there is also evidence of pre-renal failure most probably because of the myoglobin which must have been released from the muscles which have been crushed up during lynching.
I happened to pass through the ACU today afternoon. It was good to know that the relatives ultimately decided to take AS to Ranchi. But, there was something else happening there. There was a man giving a good massage to AS and he was giving it more on his head. AS' family had got hold of a traditional healer and was trying him out in our Acute Care Unit.
I did not bother much as AS was going anyway. It is so surprising that people in this place still put quite a lot of trust on people who hardly know anything about medicine. It was a paradox as AS was still in a shock and we had started him on a dopamine drip. I wonder if the relatives are really taking him to a higher centre.
Posted by Jeevan at 10:19 PM